US helicopters flew low, used electronic warfare to evade detection during the raid 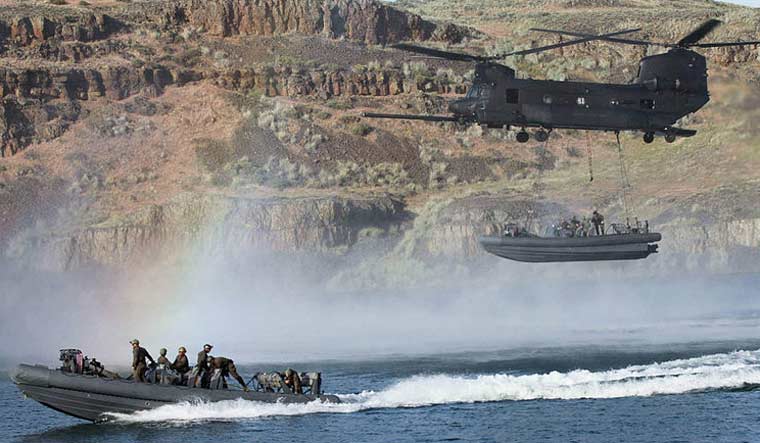 An MH-47G on exercise | US Army via Wikimedia Commons

The US raid into Pakistan to kill Al Qaeda chief Osama bin Laden in May 2011 is considered a watershed moment in the recent history of the subcontinent. The raid into Abbotabad, a cantonment town of the Pakistan Army, triggered allegations that Islamabad had harboured the Al Qaeda fugitive.

Now, a senior US Army officer, who was involved in the mission to Abbotabad, has revealed details of how helicopters with special forces entered and flew out of Pakistan. Doug Englen recently retired as the most decorated aviator in the US Army. Englen had led the helicopters that participated in the raid on the bin Laden compound.

While the soldiers of the US Navy SEAL unit have been credited with killing bin Laden, these troops were operating with the 160th Special Operations Aviation Regiment (SOAR) of the US Army. The SOAR operates specially equipped helicopters to fly troops on high-risk missions.

Englen told Military Times that he had participated in three US raids to capture or kill bin Laden before the successful mission in 2011.

The first one was in 2001 in the Tora Bora mountains of Afghanistan. A second mission in a valley Jalalabad, Afghanistan, in 2006 actually came close to getting bin Laden.

“bin Laden was there. He was there, but it took (us) so long to get in. With the noise in the valley, he had an early warning network, and he was out of there. I’d say, two or three minutes before we got in there. And that’s just enough," Englen told Military Times.

Englen revealed an MH-60 Black Hawk helicopter of SOAR crashed on that mission. However, no one was injured. bin Laden evaded a third raid by the SOAR in 2008 in the region " between the Khost Bowl and the Tirah valley in Afghanistan, right next to Pakistan".

Englen was closely involved in planning the May 2011 mission, with preparations lasting nearly four months at the CIA headquarters in Langley, Virginia. Englen was also part of the team that briefed then president Barack Obama and vice president Joe Biden about the plans for the bin Laden raid.

On the mission to Abbotabad, Englen was part of a two-unit formation of two MH-47G Chinook transport helicopters that were to set up a rearming and refuelling base for the two smaller MH-60 Black Hawk helicopters, which were to fly to the Bin Laden compound.

The MH-60 was chosen for the assault on the compound as the helicopter was smaller and quieter than the MH-47G Chinook. When one of the Black Hawk helicopters crashed near the Bin Laden compound, Englen decided to fly his Chinook to the site to pick up the downed crew.

On its return, Englen's MH-47G Chinook was was "engaged three times by a Pakistani F-16. Because he’d anticipated and planned for that, he was able to defeat and evade the fighter jet," Military Times reported.

“It was as an electronic fight. A missile never left the rail. So I was able to evade him electronically. That’s all I’ll say. But, he was searching and hunting for me, and three times came very close to actually launching a missile,” Englen said.

Englen said the Black Hawk and Chinook helicopters flew 'nap-of-the-earth', that is, very low-level, to take advantage of features of the terrain to evade tracking by radar.

Englen had been involved in numerous, classified special operations missions in his career. These included a mission to land troops into Iraq before the US launched its invasion in March 2003. Englen was also involved in two special forces missions to capture Iranian general Qassem Soleimani in Iraq in 2013 and 2016. Soleimani was killed in a US drone attack in January in Baghdad.

"It wasn’t ‘capture or kill,’ so if we couldn’t guarantee a capture, then we couldn’t take it to the next level. But we were minutes behind him and his vehicles in Iraq, and we could’ve gotten him. But our rules of engagement was, 'capture only,” Englen told Military Times.

During his interactions with president Obama on the Bin Laden raid, Englen revealed vice president Joe Biden would constantly pull him aside to make 'small talk' about his family.

"He was really concerned, you know, ‘You’re gone a lot. How’s this on the family... Finally I just politely asked him, 'Sir, if you don’t mind, I have to pay attention," Biden is currently the front-runner for the Democratic Party's nomination for presidential candidate.