China to send 100,000 ducks to Pakistan border to fight locusts 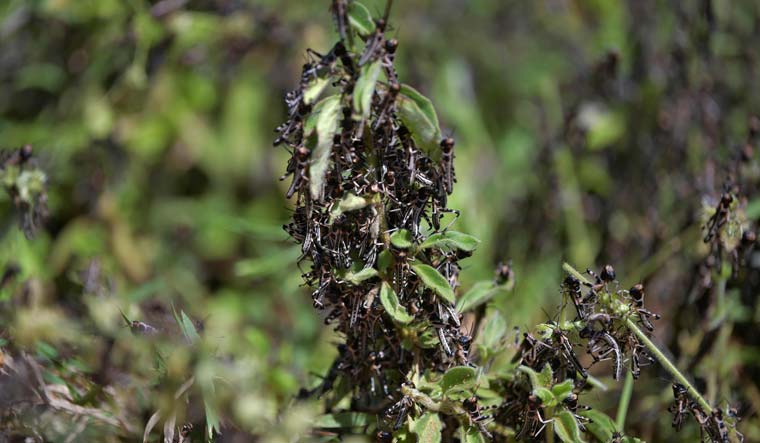 Locust nymphs aggregated in shrubbery at a hatch site in Kenya. The outbreaks began in parts of East Africa | AFP

Easier to mobilise, three-times deadlier than chickens, and capable of eating over 200 locusts a day, ducks are the perfect solution to the ongoing locust crisis affecting vast swathes of Pakistan, according to Chinese researchers.

Ten of thousands of acres of crops in Sindh have been devastated by large locust swarms, according to a report published in Dawn. The insects, which increase exponentially in number with every generation, bred in large numbers after cyclones in May and October 2018 created ideal conditions.

Attempts by the Pakistan government to combat the swarm of locusts—seen by some as an act of god—have been unsuccessful. Some reports say the use of expired pesticide may be to blame, others cite the sheer size of the infestation, said to be the worst case of locusts in over 20 years. The outbreaks began in parts of East Africa, before spreading across the continent and then into Asia.

With the infestation reaching India by late 2019, threatening over 25,000 hectares of crops in Gujarat and over 3.5 lakh hectares in Rajasthan, the Chinese government has feared that the locusts could cross over the border with India and Pakistan next.

Now, as the swarm threatens to enter China, researchers at the Zhejiang Academy of Agricultural Sciences have suggested deploying ducks as a means of meeting the challenge.

A report published in the Ningbo Evening News says that up to 100,000 ducks would be sent to Pakistan from the eastern province of Zhejiang. Just two years earlier, China had utilised ducks to fight a locust infestation in the northestern Xinjiang region.

A 2005 study found that a combination of ducks and chickens eliminated locusts in “high and cold pasturelands” at a rate of 91.9 per cent.

The ducks are therefore seen as effective and environmentally-friendlier alternatives to pesticide. According to senior researcher Lu Lizhi, speaking to Bloomberg, a trial will be conducted in Xinjiang later this year before the ducks will be sent to Pakistan.

The duck deployment comes ahead of a visit by Chinese agricultural experts to Pakistan in a bid to control the outbreak before it could spread east.

According to a joint statement by the Food and Agricultural Organisation (FAO), UN Emergency Relief and the World Food Programme, the current locust outbreaks in East Africa are unprecedented. There, the cost of fighting the outbreak was estimated at $138 million.