Brexit: How the European Union bid goodbye to Britain

A bar in Spain held a tombola to win EU passports 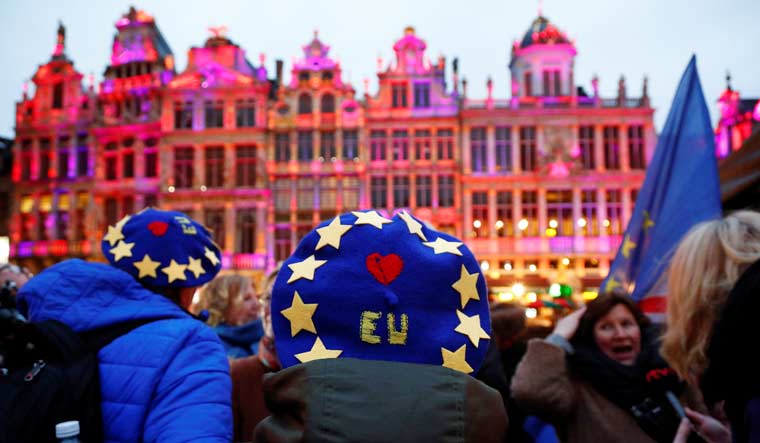 Tomorrow will officially be the first-day post-Brexit. And in a melodramatic fashion, Brussels in Belgium bid adieu to Britain from the European Union by lighting up its main square in colours of Britain's flag, the Union Jack. City authorities even a real-life black London taxi, and also dressed two city employees up as Sherlock Holmes and Dr Watson, who took selfies with passers-by.

With banners around the square that read, 'Brussels calling: Come together right now', the square also boasted of the replica of a red telephone box. Even The Manneken Pis, a small statue of a young boy urinating into a fountain which serves as an emblem of the city’s old centre, was dressed up in a costume of John Bull, an old personification of Britain— with a top hat and a waistcoat.

Spain bid farewell to the UK in its own quirky way. A bar in Spain had an exhibit of fake blue passports (colour of the EU passport) and a tombola to win an EU passport. The bar also offered typical British food of beans on toast.

After casting their final vote approving Brexit, European Members of Parliament joined hands and tearfully sang Auld Lang Syne— a Scottish song traditionally used to mark farewells. President of the EU Parliament David Sassoli held a farewell ceremony the UK's departing politicians, allowing them to make one last farewell speech before they exited the parliamentary building. Belgium MEP Guy Verhofstadt said, “It's a sad issue. Sad to see a nation leaving, a great nation that has given us all so much economically, culturally, politically, even its own blood in two world wars.”