EXCLUSIVE: From a family vacation in Bahrain to a refugee camp in Syria 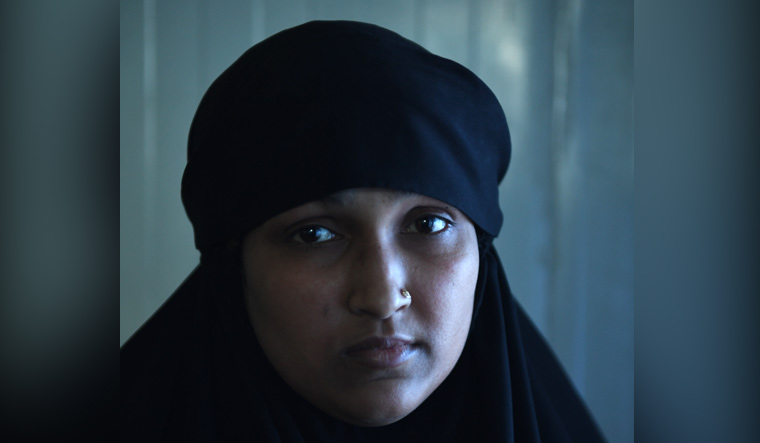 Amani Fathima, an IS widow from India | Bhanu Prakash Chandra

Amani Fathima, from Azamgarh, Uttar Pradesh, was 28 when she took the vacation that ruined her life.

In late 2014, she and her husband, Hussaifa, and their three-year-old son Kisar, left her in-laws’ home in Mumbai for Bahrain. It was to be the start of an exciting tour of the Middle East—a break from their dull, middle-class life in Kurla West. At least, that is what her husband had told her.

Fatima, now 33, and her three children are now at a sprawling refugee camp at Al-Hol in eastern Syria. The camp houses more than one lakh people from nearly 50 countries, including widows and children of IS fighters. The facility is more like a prison; families live in seemingly endless rows of tiny tents that have muddy floors covered by thick sheets.

Deputy Photo Editor Bhanu Prakash Chandra and I visited Al-Hol on a soggy December afternoon. Fathima and her daughters sat with us in the camp office. Kisar, who had turned eight, was guarding the tent.

The facility is more like a prison; families live in seemingly endless rows of tiny tents that have muddy floors covered by thick sheets.

Life in Al-Hol becomes hell during the rains. Water seeps through the tents and sewers overflow, turning the camp into a den of diseases. There are four hospitals inside the compound, run by around 30 aid groups, but demand always outstrips supply.

“Please take me back home,” said Fathima. “Life is very difficult here. It is cold, and the children often fall sick.”

We sat in one of the two makeshift rooms that were fenced off from the main office space. The rooms had thick walls and PVC doors. One room was exclusively used by officers of the Syrian Democratic Forces, a coalition of Kurdish, Syrian and Arab militias that run the camp. The other room served as a lounge for visiting diplomats, journalists and researchers. There were brown sofas all around, and a small glass-topped table holding an ashtray.

Armed guards escorted us to the annex, a section where 12,000 wives, widows and children of IS fighters are held. I was told to wrap my shawl around my head. “The women inside are highly religious, and they might attack you if you do not.”

The annex was a place of tension and commotion. There were women shouting at the guards in strange tongues, babies crying nonstop, and mothers calling out for help. The nervous guards kept a tight grip on their rifles, fearing that they would be attacked any time. It was in this cauldron of resentment that we found Fathima.

Diplomats and activists from other countries had been visiting Al-Hol regularly to look for their nationals. We were her great hope, said Fathima, as this was the first time that Indians had come calling.

For the full story, pick up the latest issue of THE WEEK, out on stands now.