Kangujam may be the youngest climate activist in the world 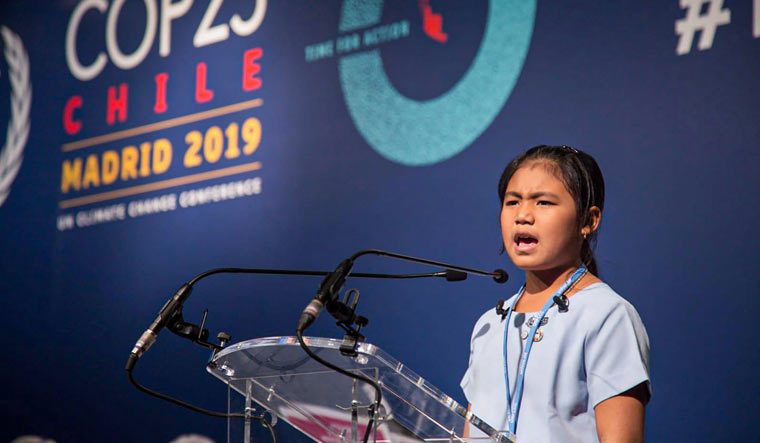 Eight-year-oldLicypriya Kangujam from Manipur speaks at the Climate Summit in Madrid, Spain | PTI

While kids her age are learning addition and subtraction, and reading Enid Blyton, eight-year-old Licypriya Kangujam from India has dropped out of school to pursue her passion—to fight the battle against climate change.

Speaking at the COP25 climate conference here on Tuesday, the young activist from Manipur who has already spoken in 21 countries on climate change, gave the world a glimpse of her resolve as she urged global leaders to "act now against climate change".

The little girl has quickly shot to limelight with Spanish newspapers hailing her as 'Greta' of the Global South.

Watching Kangujam speak with such wisdom, it's hard to guess her age—all of eight years old. But she nearly missed the chance to give her message to the world.

According to her father, K.K. Singh, who accompanied her to Spain, several requests to the government to help her with funding fell on deaf ears.

Singh noted that when the UN sent her the invitation letter to participate, and address her concerns at COP25, they had no idea how they will manage the expenses to travel to Spain. Singh said the family sent email requests to several ministers, including the Union Environment Minister Prakash Javadekar, for sponsorship but got no reply.

He said after trying to crowdfund her trip, a person from Bhubaneshwar booked tickets for Kangujam, including him.

"My mom broke her gold chain and finally booked my hotels," Kangujam said.

However, Singh added that just a day before leaving for Madrid from India on November 30, they got an email from the Spanish Government that their accommodation for the 13-day event will be sponsored by them.

Making it to Madrid after crossing so many hurdles made Kangujam even more determined to ensure she is heard.

"I have come here to tell the world leaders that this is the time to act as it is a real climate emergency," the young activist enthralled the audiences during a high-level event at COP25 conference being held in the Spanish capital from December 2-13.

Kangujam had to drop out of school in February as she could not attend most of her classes.

Activism, including participating in a weekly protest outside the Parliament house, took up most of her time.

While her fight against climate change will continue, the girl has not given up on the dream of pursuing her education altogether.

According to Singh, Kangujam is the youngest climate activist in the world. 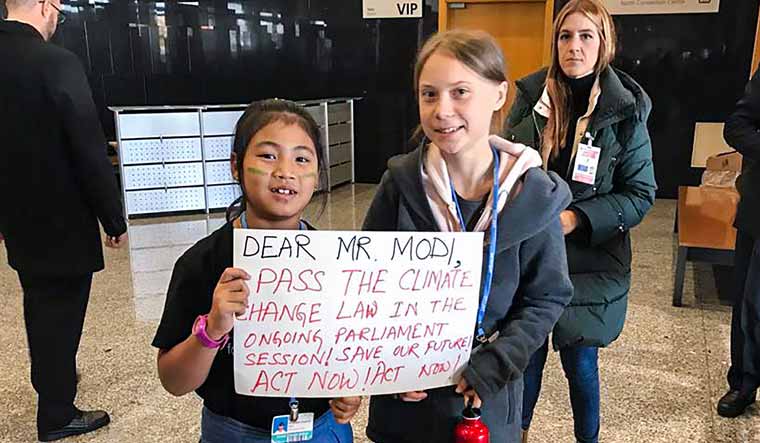 Licypriya with Greta at COP25 | PTI

The 28-year-old father said that in 2018 when Kangujam was just six-year-old, she got an opportunity to attend the 3rd Asia Ministerial Conference for Disaster Risks reduction 2018 (AMCDRR 2018) in Ulaanbaatar, the capital city of Mongolia.

"It was my life-changing event. During the conference, I met many world leaders and also thousands of delegates from various countries of the World. Many had highlighted various issues of disaster," Kangujam told PTI on the sidelines of the event.

I cry when I see children losing their parents and people becoming homeless due to danger of disasters. My heart feels sorrowful for people who can't help themselves when disaster strikes. Many root causes are the impact of climate change, she said.

Just after her return from Mongolia, Kanjugam with the help of her father started an organisation called 'The Child Movement' to call on the world leaders to take immediate climate action to save the planet and the future of young children like her.

So far, Singh said, Kangujam has travelled 21 countries and spoken at more than 60 places as a part of her movement.

"I travel place to place to raise my concerns about climate change and disaster risks reduction to the people of the world, the young climate activist explained.

The Spanish newspaper El Pais described Kangujam one of the 'Greta' of the global south, after her walk with the Swedish teenage climate activist Greta Thunberg last week here.

At the high-level meeting, Kangujam, speaking alongside several other political leaders from around the globe, made an emotional appeal to the world leaders to act before it is too late.

"I'm coming here to tell the world leaders that this is the time for action. What I want is not about today or tomorrow but what needs to be done now, she explained.

She noted in her speech that when she was born, the world leaders had already met 16 times in the COP, and they already knew about the bad effects of climate change.

"Our policymakers from around the world just gather here every year at COPs and do nothing concrete for our future", she said.

"Why should I come here? Why I should speak here? I have to go to my school. I have to read my books. I have to play. I have to study. But our leaders all have ruined my childhood life and my beautiful future. This is not fair!" she said.

Kangujam was born in Imphal but has almost always lived outside the state, especially in Delhi and in Bhubaneswar.

She noted that the young climate activists like her want a system change, not climate change.

She said the governments must come in action on what they promised, referring to the 2015 Paris Climate Agreement of limiting global temperatures to 1.5 degrees Celsius by 2030.

Kanjugam is inspired by the works of Mahatma Gandhi and Former President of India A.P.J. Abdul Kalam.

"Greta Thunberg has also greatly influenced me since February 2019," she added.