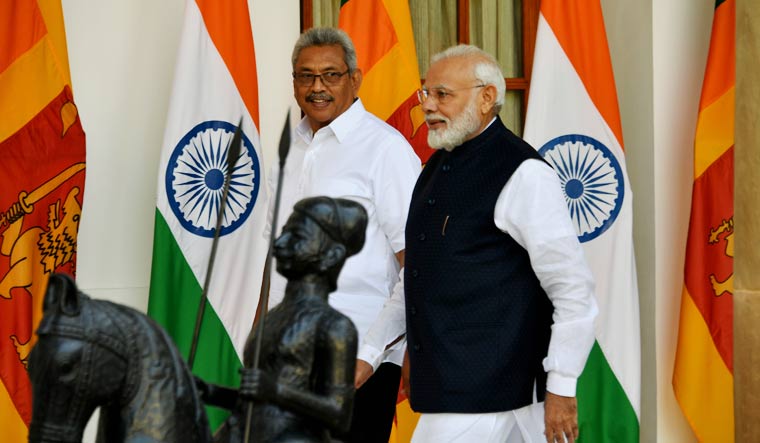 Gotabaya Rajapaksa’s much-anticipated overseas trip—his first since taking office as president—saw India and Sri Lanka assert their priorities and sensitivities as they pledged to work together in harmony.

After a round of talks with Rajapaksa, Prime Minister Narendra Modi offered Sri Lanka a $400 million line of credit as well as $50 million for combating terrorism.

The latter was much appreciated by Rajapaksa, who had made combating terror a key part of his election campaign, coming as it did in the aftermath of the deadly Easter Sunday bombings that left 253 dead and over 500 injured.

In addition, Modi said that both leaders have agreed to utilise a previously-announced $100 million line of credit for solar projects.

This visit was in sharp contrast to that by Rajapaksa's predecessor Ranil Wickremesinghe in September 2015, when the gifts offered were relatively smaller; a deal to supply medicines to a Colombo hospital as well as to establish an ambulance service there.

This time, the wooing needed to be more carefully crafted, since Rajapaksa's pro-China leanings are clear. There was a hint of that stance in Rajapaka's speech when he said that Sri Lanka's cooperation with India was multifaceted, but that the priority was security. With other countries, however, he said the focus was “economy and commerce”.

While India cannot match China's deep pockets or cheque diplomacy, the country seeks a different approach to building development partnerships, focussing on projects that are decided by the recipient country as per their development priorities. Modi spoke about the 46,000 houses that India has built for internally displaced Sri Lankans and the assistance provided for small development projects.

Modi at the same time, stressed on India's expectations from Sri Lanka on the rehabilitation of Tamils, stressing that the government should implement the 13th amendment for ensuring that the aspiration of Tamils for equality, justice and peace were met with during the reconciliation process. The 13th amendment to the Sri Lankan constitution is about devolution of power to provinces and for making Sinhala and Tamil the official languages with English as the link language.

In turn, Rajapaka called for increasing economic engagement with India and working to benefit from India’s economic rise.

Interestingly, he also spoke on the need to work towards letting the Indian Ocean region remain a zone of peace. The Indo-Pacific concept that has become popular of late is seen by China as exclusionary, despite Modi's articulation that it is not directed against anyone. China sees the Indo-Pacific as a US-led coalition to counter China.

The new relationship with Sri Lanka will require calibrated nurturing by New Delhi. Rajapaksa has reciprocated India's invitation with one of his own, asking Modi to be the first head of government to visit Colombo under his tenure.

With security and development on the agenda, India will hope to counter China's influence on the island nation.