Gotabaya Rajapaksa interview: 'This government is very complacent; I will run for president' 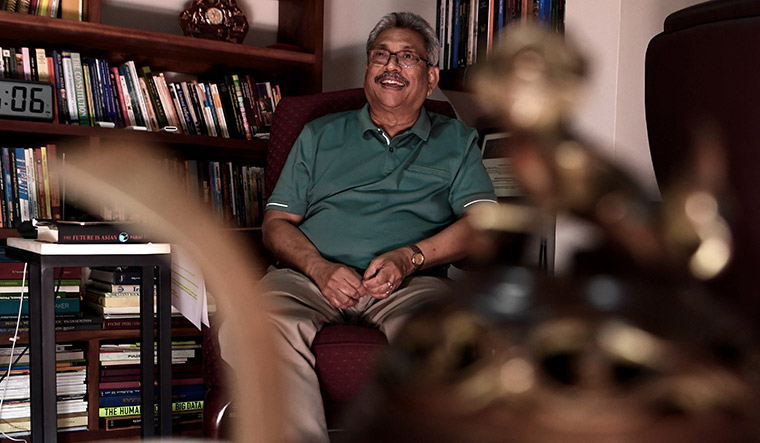 AS DEFENCE SECRETARY in his elder brother Mahinda Rajapaksa’s government, Gotabaya Rajapaksa played a ruthless role in wiping out the Liberation Tigers of Tamil Eelam, which had waged a civil war for three decades in Sri Lanka. A few days after the terror attacks on Easter Sunday, THE WEEK met Gotabaya in his small bungalow in Nugegoda near Colombo. Putting aside the book The Future is Asian by Parag Khanna which he was reading, he spoke on the return of terrorism and on his determination to become the country’s president. Excerpts:

What do you have to say about the Easter attacks?

It is very sad and shocking. Especially so for me, as I was one of the leading personalities responsible for ending the war. I never thought Sri Lanka would witness [such] a violent incident after 2009.

Mahinda Rajapaksa said this would not have happened if he were in power.

For the Rajapaksa government, the top priority was national security. Every time there was a threat, we took action to identify the threat to prevent this type of [attacks]. After ending the war in 2009, we had to act differently to identify the threat. We did that. We found there were [remnants] of the LTTE, which could regroup, reorganise and restart their campaign. Then we saw the radical Islam group as a potential threat. We worked towards preventing it. And then the next threat was drugs.

What would you have done if you were the current defence secretary?

We gave freedom to the intelligence agencies for monitoring and surveillance. I sent senior officers to the US for training [to fight radicalisation]. They were well trained to collect intelligence, and to monitor groups and cyberspace. To monitor cyberspace, we set up a centre with all the infrastructure. We recruited people in intelligence and at the cyber centre to monitor Islamic radicals; they were also trained in Arabic. We did not allow radical preachers from other countries to come in. A hundred preachers were deported. I was criticised, but till the end of 2014 there was no spot of violent preaching.

I was always security conscious. We were prepared. And because I had the intelligence knowledge, we neutralised the LTTE. Similarly, we would have monitored this (radicalisation), too, and would have controlled it with the mechanism we had. If they (the current government) had monitored it, they could have arrested them and broken the network.

It is clear that the authorities and the government did not take the information seriously. The intelligence information was always there. Because the intelligence network was broken, the authorities were not aware of it. You know, they are very complacent. The government is not considering the security of the country as a priority. So how can others? This is the problem. 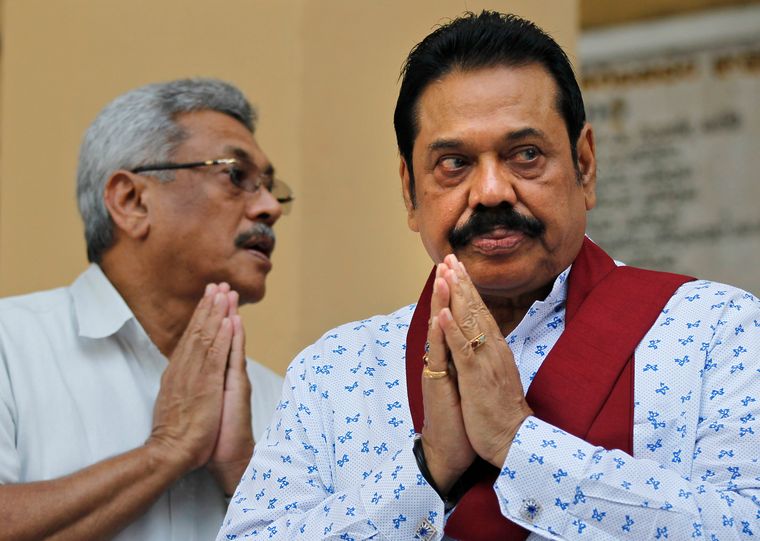 It is said that India shared intelligence about possible attacks with Sri Lankan authorities.

I think they gave the information on April 10; they had [done so] previously, and also two hours [before the attacks]. It is unfortunate that we could not act upon it.

Has India always helped Sri Lanka in terms of intelligence?

Yes. Especially after the Mumbai attacks (in 2008), I got information from the Indian intelligence agencies, on numerous occasions, that certain people from various countries come here and meet people from India. I stopped them from coming into the country. I arrested them. India’s intelligence has been helping Sri Lanka and vice versa.

When you were defence secretary, how was your rapport with India?

I had a very good rapport with India (smiles). I don’t know if you have read the book Choices. (He picks up the book by former foreign secretary Shivshankar Menon from his huge bookshelf and opens a chapter marked in green ink.) It has a chapter on Sri Lanka. It describes me, a chapter on Gota. It explains our relationship. We met outside the normal channels, out of the foreign ministry, and created a different channel to have this relationship. Three people from here and three people from there, including myself and [presidential adviser] Basil Rajapaksa, Shivshankar Menon, [national security adviser] M.K. Narayanan and [foreign secretary] Vijay Singh. We met very regularly. We exchanged ideas at different times, very sensitive times, and we solved those issues. We had a very close relationship.

How useful was this relationship for Sri Lanka?

It was very useful. I believed working with India closely was very important to Sri Lanka.

But now it seems like Colombo has taken China’s side and has started ignoring India. This tilt started during your rule.

We were blamed for [this] during the later stage [of our rule]. But I think it was misunderstood. The geopolitical analysts analysed it in the wrong way, because they did not have the correct information. Of course the China-Sri Lanka relationship was a diplomatic relationship. It was very old. But during our period, after the war, there was a lot of Chinese investment in Sri Lanka. That was purely a commercial arrangement, because after the war we needed quick development in the country. We got assistance from China mainly on infrastructure development. We never forgot about the national security issues and our relationship with India; we categorically said that we will not allow any country to have military presence in Sri Lanka and that we will not do anything that will [cause] any security concerns for India.

Have you ever felt that India acted like a big brother in its diplomatic relationship with Sri Lanka?

No. I did not feel that because of the way Narayanan and Menon acted. They had a very friendly attitude. I thought we always had the opportunity because ours is a small country and if we worked properly, India has a very big market for our products, and we can get assistance in many areas. I think we can benefit because of India.

You said geopolitical analysts have got it wrong when it comes to Sri Lanka. Does geopolitics play a major role in politics in Sri Lanka?

It looks like that because, again, I feel it is a misunderstanding of this China factor. Geographically, we are in a very strategic location in the Indian Ocean, which itself is very important as it links the east and the west. And both sides need to use the Indian Ocean, especially for shipping and sea links. China, Japan and all the industrialised countries need energy that is coming from the Middle East. Also, China needs a lot of minerals from Africa. At the same time, the products produced by these countries have to go to these markets, whether it is Europe or Africa or the Middle East. So they need to keep this access open. When they see the Chinese involvement, they get worried about [whether there will be] a sort of China domination in the Indian Ocean. They all want to be part of this region. But we will definitely react.

Do you think Sri Lanka is slipping once again when it comes to peace?

It has already slipped. We never expected this to happen after 10 years. Now I think the government must put things together and immediately put a stop to this.

The civil war was over in 2009. But there was a lot of bloodshed. Some even look at you as a villain.

Yes. But I am worried about the country, the people. I know the majority of the people respect me as a hero, and because I did what a lot of people couldn’t do for a long period. I did not start the war. It was started in late 1979. And when I took over [as defence secretary in 2005], the war was at a critical juncture. I didn’t create the LTTE. It was a strong terrorist group by that time. It is not the Rajapaksas who created the war. The previous governments and their mistakes did it. [The unrest] started during the United National Party rule, during the J.R. Jayewardene period.

Actually, one reason I think it started was the economy. You see, before 1977, the Jaffna farmer was very rich. Chillies, onions, tomatoes, potatoes, fish and tobacco were coming from the north. So, those days, we were self-sufficient. But after 1977, when the Jayewardene government introduced economy without any control, we began importing these things, and the economy of these people collapsed. The UNP government could not control it.

What they did was, they collected all the people here and sent them to Jaffna. They are the people who strengthened the LTTE. That was when the Tamil diaspora was created. So, again, the UNP is responsible. The Jaffna Public Library burning (in 1981), it is the UNP [that did it]. Then the District Development Councils brought a solution and the [1982 presidential] election was held. But it was rigged by the UNP. The Sri Lankan Freedom Party government didn’t do anything against the Tamil people. I don’t understand how the Tamil National Alliance can support the UNP.

We did not start this whole thing. We stopped the war. Now what you see in the east and the north are the results of stopping the war. There is development. Instead of [taking up] weapons, [children] are going to school. The people are not worried about their children joining the LTTE. I don’t understand why people point fingers at me.

During the last stages of the war, did LTTE chief V. Prabhakaran try to contact you or did you reach out to him?

No. He never did. Because he is a different kind of leader. We monitored his conversations with KP (LTTE leader Kumaran Pathmanathan) several times. Even during the last stages, KP wanted to take him out [of Sri Lanka]. But he never agreed.

Will you run for president?

Is it because Mahinda cannot run?

Yes. The most popular leader in this country has been Mahinda Rajapaksa. But he cannot contest [because of the 19th amendment to the constitution]. That is why he wanted me to [contest]. [There are also a] lot of people who see me as a person who can deliver, because I have delivered on whatever responsibility was given to me, whether it was urban development or law and order. And, generally, there is frustration and dissatisfaction with the traditional politicians in Sri Lanka. Maybe that feeling is there all over the world. I am somebody out of traditional politics. I think it is my duty and responsibility to serve the country and that is why I decided to contest.

You have dual citizenship. Is that not a hindrance?

I have renounced it (US citizenship).