Republicans have chosen a rallying cry: there was 'no quid pro quo'. 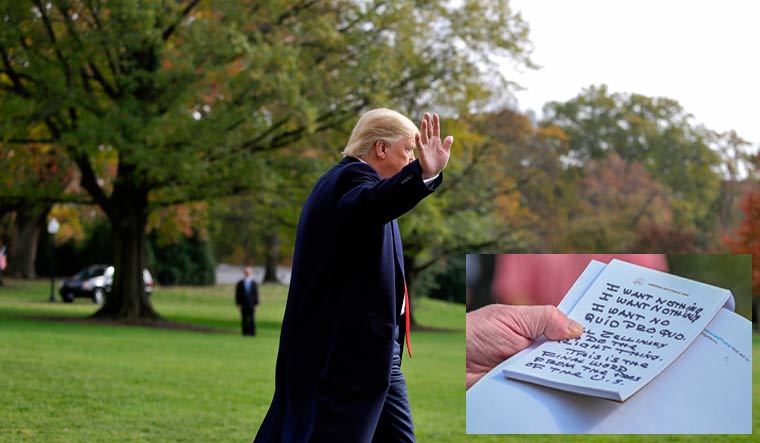 US President Donald Trump walks on the South Lawn from the White House before departing for Texas | AFP; Inset: Trump holds what appears to be a prepared statement and handwritten notes after watching testimony by US Ambassador to the European Union Gordon Sondland | Reuters

The Latin phrase, 'Quid pro quo', which is the front and centre of impeachment hearings in impeachment proceedings against President Donald Trump is omnipresent across airwaves and social media.

White House Democrats initiated the impeachment inquiry on grounds that Trump abused his position of power. He allegedly asked Ukrainian government officials to investigate political rival Joe Biden and his son Hunter for corruption and held back military aid close to $400 mn insisting that the investigation should amount to something.

The expression, literally meaning 'something for something,' made headlines again Wednesday when US ambassador to the European Union Gordon Sondland told lawmakers Trump had sought such a deal with Ukraine.

Republicans who have been standing behind the President have chosen a rallying cry: there was 'no quid pro quo'. The phrase echoes the "no collusion" mantra adopted by the president during special counsel Robert Mueller's investigation into Russian meddling in the 2016 election.

According to linguists, using the same expression over and over again is a clever way of lodging a specific idea in voters' brains.

Earlier this month, 33 American writers signed a letter to The New York Times asking it to stop using the phrase concerning the impeachment inquiry.

"Most people don't understand what it means, and in any case, it doesn't refer only to a crime," they wrote.

The writers, clearly Trump opponents, urged the newspaper to use terms such as 'bribery' or 'extortion,' to make clear that what the president asked of Ukrainian leader Volodymyr Zelensky was "a crime." Democratic bosses might have been reading.

The use of language more explicitly associated with criminal activity was a clear attempt at trying to win over voters sceptical of the impeachment proceedings.

Ben Zimmer, a lexicographer, says Sondland's statement will give the term 'quid pro quo' another boost.And so it did: midway through Sondland's appearance before Congress, Trump addressed reports on the lawn of the White House, reading from notes on the testimony.

A photographer captured what the president had scribbled in a black marker pen: "I want no quid pro quo."

On November 16, former US envoy to Ukraine, Marie Yovanovitch who testified before the Permanent Select Committee on Intelligence said she was unaware of any criminal activity involving the president.

This testimony came right after the one on November 14, when two top diplomats William Taylor and George Kent revealed compelling details regarding Trump's alleged acts of efforts to get Ukraine to investigate his potential 2020 rival Joe Biden. While Taylor revealed about Trumps attempts to put pressure on Ukraine, Kent said that the President and his lawyer Rudy Guiliani had no basis for allegations against Biden and his son.

If the House of Representatives, which has a Democratic majority, votes to impeach him, Trump will face trial in the Senate to decide whether he be removed from office.

Though impeachment is unlikely as Republicans have the majority in the Senate, Democrats hope they can at least convince voters that Trump abused his position to serve his political interests and thereby encourage them to vote him out of office next year.