OPINION: From Army to Imran, all political players in Pakistan are frauds 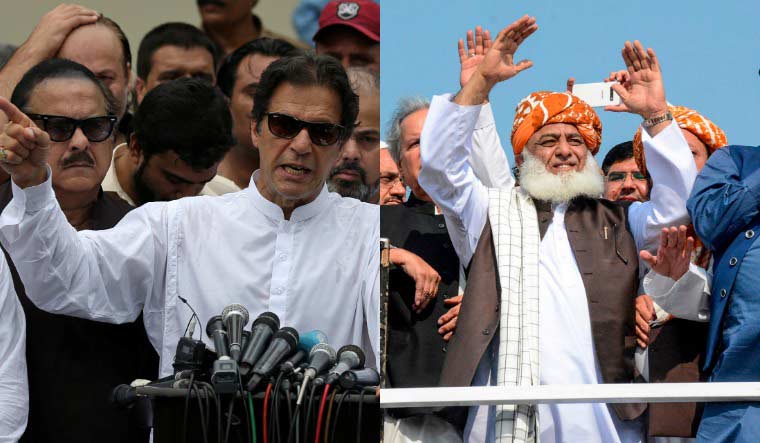 Just consider, every one of the political players in Pakistan is a fraud: The army (the real power, who are only looters); Imran Khan, the prime minister, who, in his quest for power, abandoned all his professed principles; both main opposition parties—the PPP and the PML(N)—who looted the country for decades—and religious bigots like Maulana Fazlur Rahman, the chairman of the Jamaat Ulema-e-Islam (F).

Combined with the fact that the Pakistan economy is tanking, public debt mounting, prices of essential commodities rising and people's distress growing, this situation is a recipe for a total collapse of everything and a prolonged period of chaos in Pakistan.

Prime Minister Imran Khan, in his election campaign last year, had promised accountability, transparency and the moon to the people of Pakistan (just as Narendra Modi had promised 'vikas' and 'achche din' to the people of India). The gullible people of Pakistan, like children following the Pied Piper of Hamelin, were taken in by Khan's promise of Madina ki Riyasat, Naya Pakistan and all that kind of jazz, just as the impressionable people of India were wooed by Modi.

But Khan had no qualms about taking the help in his election campaign of religious extremists like hounds and lumpens calling themselves Tehreeke Labaik, giving tickets to dubious 'electables' and characters like Amir Liaquat, whose TV show resulted in the brutal murders of several Ahmadis, and sacking internationally renowned economist Atif Mian from the Pakistan Economic Advisory Council only because he was an Ahmadi.

Now, Imran Khan is being opposed by another fraud, Maulana Fazlur Rahman. A perusal of Rahman's past record shows he is a thug and rank opportunist, who can sink to any level in his quest to become the prime minister of Pakistan (it was reported that in 2007 he even pleaded with the then US ambassador to Pakistan to help him in this quest).

Rahman, a fraud and gangster, had announced his plan to march from Karachi on October 27 to Islamabad, where he intends to reach on October 31, where in a huge rally, he will demand the resignation of Khan. Set a thief to catch a thief!

And the interesting thing is that the two main opposition parties—the PPP and the PNLN (they have been called chor and daaku in Parliament by Imran Khan's Sancho Panza, Fawad Chaudhry)—have announced they will join in the march led by Rahman.

Will the real power in Pakistan, the army, which has its fingers in almost every sector of the economy (see my article Opinion: The truth about the Pakistan military), and whose senior officers end up as millionaires (a few even billionaires), remain bystanders during this farcical drama, or are they supporting it behind the scene like a hidden puppeteer? It is widely believed the army 'selected' Imran Khan, but are they dissatisfied with his performance for some reason? Little is known.

But what can be said for certain is this: the march on Islamabad will at most result in the removal of Imran Khan, but he will only be replaced by another fraud, with no change in the lives of the people, with massive poverty, unemployment, malnourishment and other problems expected to continue.

At most, Maulana Fazlur Rahman will be acting like Father Gapon in Russia on Bloody Sunday in January 1905, leading the people to slaughter (Gapon was later exposed as a police agent).

Pakistanis, you created an Islamic state, now eat your Islam, just as your Indian counterparts are eating their Hindutva, Ram Mandir and cow protection. Neither of you will get food to eat.