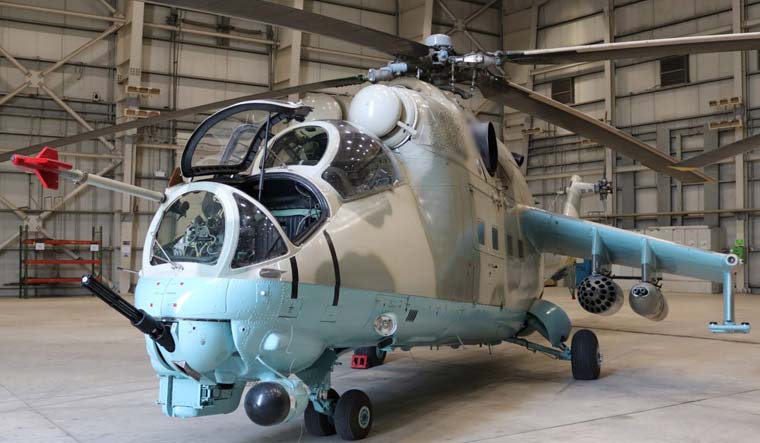 In addition to showcasing India's commitment to Afghanistan's security, the transfer highlights the utility of the Mi-24, which first came into global prominence during the Soviet invasion of Afghanistan from 1980 to 1989.

The four helicopters being supplied to Afghanistan are refurbished platforms from Belarus. Thursday's announcement marks the second time India has supplied the Mi-24 to Afghanistan. In December 2015, during a visit to Afghanistan by Prime Minister Narendra Modi, India had announced it would transfer four Mi-25 helicopters—an earlier export version of the Mi-24—to Kabul. The Mi-25 helicopters were donated from the Indian Air Force. However, these aircraft faced serviceability issues due to lack of spares.

In 2016, general John Campbell, the outgoing commander of US forces in Afghanistan, told a Congressional hearing that India's gift of Mi-24/25 helicopters would make a big difference in Kabul's fight against militants.

The Mi-24 helicopter, bristling with rockets and guns, was among the most iconic sights of the disastrous Soviet invasion of Afghanistan. The Mi-24 was used to target the Afghan Mujahideen hiding in mountainous regions and evoked terror till the CIA supplied Stinger anti-aircraft missiles to the Afghan resistance. The significance of the Mi-24 as a symbol of Soviet power can be gauged from the fact that the aircraft played prominent roles in two iconic 1980s movies—Red Dawn and Rambo III—albeit as poorly made props.

While numerous Mi-24 helicopters figured among the nearly 270 Soviet aircraft reportedly shot down by the Stinger missiles, the helicopter's reputation has remained intact.

It has seen action in numerous conflicts and has been in service with about 60 nations, at various points of time. Recent users of various Mi-24 variants include countries as diverse as Brazil, Pakistan and Indonesia. More than 2,500 Mi-24 helicopters, in numerous variants, have been built. The Mi-24 has also been upgraded by various countries over the years, with the Indian Air Force opting for Israeli electronics in the last decade.

The Mi-24 carries less sophisticated sensors and targeting systems than newer attack helicopters like the US-built AH-64 Apache, that the Indian Air Force is now buying. However, it has a reputation for being sturdy and easy to maintain—an advantage in a country like Afghanistan. Another advantage of the Mi-24 is its capability to carry a small squad of around six armed soldiers, making it a dual attack-transport helicopter.