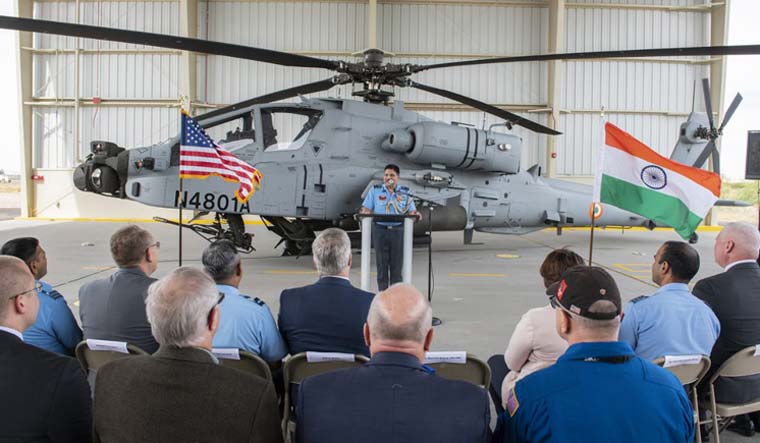 After handing over the first lot of Chinook helicopters that are meant for the strategic lift role, the first AH-64E (I) Apache Guardian helicopter was formally handed over to the Indian Air Force at the Boeing production facility in Mesa, Arizona, in the US.

Air Marshal A.S. Butola represented the Indian Air Force and accepted the first Apache in a ceremony at the Boeing production facility. Representatives from the US government were also present at the ceremony on Friday.

Called 'flying tanks', the Apache attack helicopters will be a major component in tank battles for the India Army, especially on the western front with Pakistan. Fitted with missiles, Apache helicopters are capable of detecting 256 moving targets and engaging them. Apache, a twin-engined helicopter, is operated by two pilots.

With its array of modern electronics, Apache is considered to be one of the most advanced combat helicopters. The Apache helicopter was involved in missions during the 1991 Gulf War between the US and Iraq and then in US operations in Afghanistan. India will be the 14th country to operate the Apache.

The IAF, in a statement, said that it had signed a contract with the US government and Boeing in September 2015 for 22 Apache helicopters.

"The first batch of these helicopters is scheduled to be shipped to India by July this year," the statement said, adding that selected aircrew and ground crew have undergone training at facilities at the US Army base at Fort Rucker, Alabama. "These personnel will lead the operationalisation of the Apache fleet in the IAF," the statement said.

The IAF claims that addition of the AH-64 E (I) helicopter is a significant step towards modernisation of its helicopter fleet. "The helicopter has been customised to suit IAF’s future requirements and would have significant capability in mountainous terrain," an official said.

The Apache has the capability to carry out precision attacks at stand-off ranges and operate in hostile airspace with threats from the ground.

The ability of these helicopters to transmit and receive the battlefield picture to and from the weapon systems through data networking makes the Apache a lethal acquisition.

"These attack helicopters will provide a significant edge in any future joint operations in support of land forces," the IAF said.