Several people have been arrested in connection with the attacks 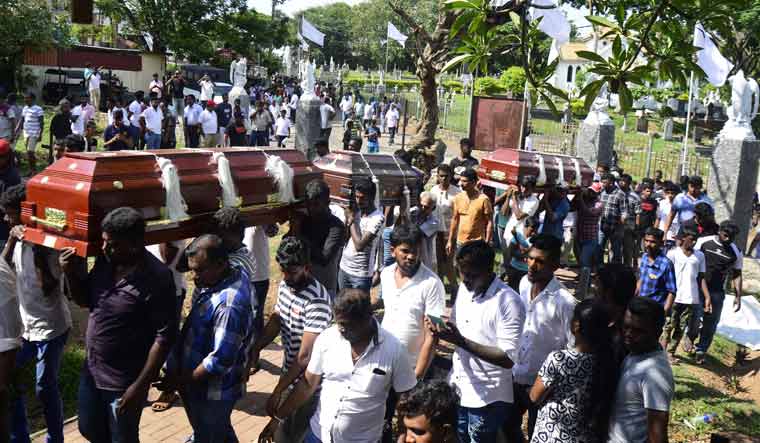 Extensive search operations were carried out and several people arrested in connection with the attacks on Tuesday, Police spokesman Ruwan Guansekera said.

“The number of death now is 359,” Guansekera said.

The Islamic State has claimed responsibility for the devastating Easter blasts in Sri Lanka and identified the suicide bombers who were involved in the attacks.

Seven suicide bombers carried out a series of devastating blasts that tore through churches and luxury hotels in Sri Lanka on Easter Sunday, in the country's worst terror attack.

Gunasekera said that the search operations were carried out during Tuesday night's curfew hours in different parts of the country.

Police arrested scores of people with their suspected links to the National Tawheed Jamath, the group which officials believe carried out the bombings.

Over 10 people have been arrested from the Muslim minority concentrated areas of Aluthgama and Beruwela, south of Colombo, police said. Further six were arrested at Katuwapitiya in the western coastal area where the bombed St Sebastian's Church is located.

Giving information on the suicide bombers, the police said that the attacks at the Cinnamon Grand and Shangri La Hotels had been carried out by two brothers.

The Cinnamon Grand Hotel bomber had booked himself into the hotel on the previous night. CCTV footage have shown his breakfast table where he was seen consuming pieces of fruit and taking a walk around the restaurant before blowing himself up.

Their younger brother has also been nabbed by the police. The house search had led to the discovery of extremist literature, a computer hard disk and SIM cards, thought to have been used to coordinate the blasts.

The police has already arrested the accomplices of the bomber of the lodging house near the National Zoo at the Colombo suburb of Dehiwela.

The tuk tuk taxi driver who had taken him to the lodge was also arrested, the police said.

The police suspected the bomber may have been targeting the nearby St Mary's Church where a large gathering was present at the Easter Sunday mass.

Speaker Karu Jayasuriya said Parliament would meet on Wednesday to debate the security situation in the country in the aftermath of the blasts.

The emergency regulations which were announced by President Maithripala Sirisena would be presented for Parliament's ratification.

The emergency powers allow the security forces to launch crackdown on law and order breaches by sudden searches of property, arrests and detention of people indefinitely.

Jayasuriya told Parliament on Tuesday that the security of Parliament has to be stepped-up as warnings were receive on possible threats.

Sirisena, in his national address on Tuesday night, said the emergency regulations would only deal with counter terrorism measures and would in no way hamper the democratic and civil freedoms.

The Ministry of Education said the reopening of schools had been put off till April 29.