The blasts occurred at around 8.45 am as Easter Sunday masses were in progress 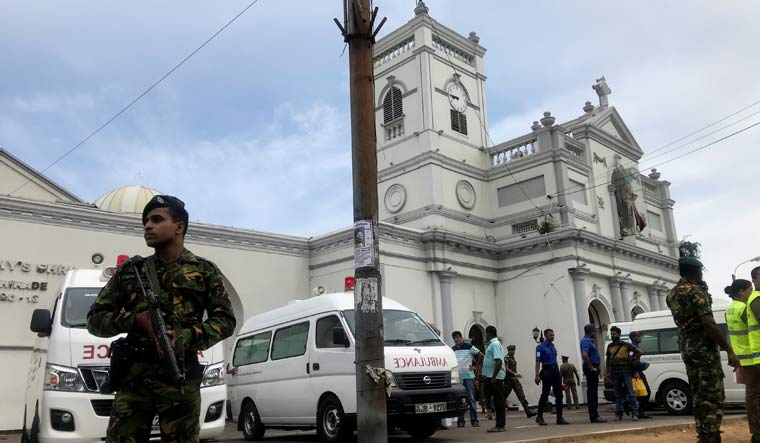 Sri Lankan military officials stand guard in front of the St Anthony's Shrine, Kochchikade after an explosion in Colombo | Reuters

Six blasts hit three churches and three five-star hotels in Colombo, Negombo and Batticaloa in Sri Lanka on Easter Sunday, one of the deadliest blasts in the island nation's history, killing 160 people and injuring over 400 others. Officials said the death toll is expected to rise.

According to reports, three churches―St Anthony's Church in Colombo, St Sebastian's Church in the western coastal town of Negombo and another church in the eastern town of Batticaloa―were hit. The blasts occurred at around 8.45 am local time as Easter Sunday masses were in progress in the churches.

In addition, explosions were reported from three five-star hotels―the Shangrila, the Cinnamon Grand and the Kingsbury.

Hospital sources said that over 300 people were admitted with injuries. Officials said that 42 have died in Colombo, 60 in Negombo and 27 in Batticaloa.

Sri Lankan Prime Minister Ranil Wickremesinghe condemned the attacks and called upon all citizens to unite during this tragic time.

"I strongly condemn the cowardly attacks on our people today. I call upon all Sri Lankans during this tragic time to remain united and strong," he tweeted. "Please avoid propagating unverified reports and speculation. The government is taking immediate steps to contain this situation."

The President said he has instructed all law enforcement agencies and defence services to take every possible step to maintain law and order and conduct speedy investigations into the dastardly attack and bring the culprits and those who were behind this conspiracy to book.

"I have given instructions to take very stern action against the persons who are responsible for this conspiracy," the President said and added that all required steps have been taken to fulfill the responsibilities as a government.

Sirisena appealed to the nation to act with utmost restraint and patience, and not to be misled by baseless rumours and false stories. He also urged the people to extend unstinted support and cooperation to the government for the steps taken at this trying occasion.

No group has claimed responsibility for the blasts.

However, most of the deadly attacks in the past in Sri Lanka were carried out by the Liberation Tigers of Tamil Eelam (LTTE). The LTTE ran a military campaign for a separate Tamil state in the northern and eastern provinces of Sri Lanka for nearly 30 years. The Sri Lankan Army killed its supreme leader Velupillai Prabhakaran in 2009, thus bringing an end to the island nation's civil war.

Meanwhile, the Indian High Commission said that it was closely monitoring the situation in the island nation.

“Explosions have been reported in Colombo and Batticaloa today. We are closely monitoring the situation. Indian citizens in need of assistance or help and for seeking clarification may call the following numbers : +94777903082 +94112422788 +94112422789,” the Indian High Commission in Colombo tweeted.

“In addition to the numbers given, Indian citizens in need of assistance or help and for seeking clarification may also call the following numbers +94777902082 +94772234176,” the high commission added.