We didn't spy on Indian ASAT missile test: US govt 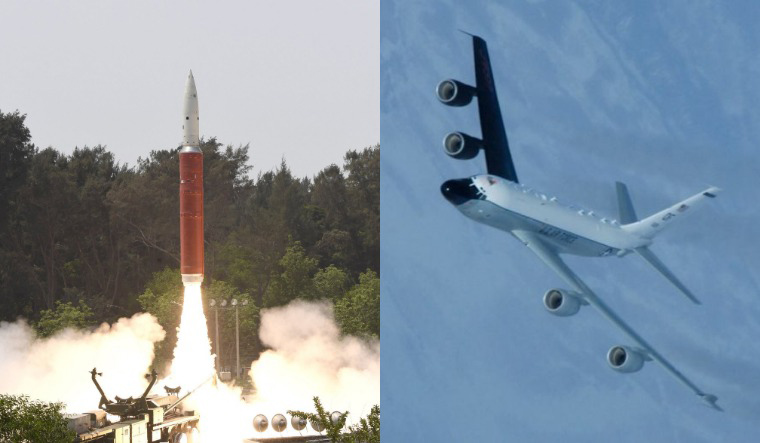 The Pentagon has strongly denied reports that the US spied on India's anti-satellite (ASAT) missile test by sending a reconnaissance aircraft from its base in Diego Garcia in the Indian Ocean to monitor the development.

It, however, said the US was aware about India's first test-firing of an anti-satellite missile.

"No US assets were spying on India. In fact, the US continues to expand its enduring partnership with India, resulting in enhanced interoperability and stronger economic ties," US Defense Department spokesperson Lt Col David W Eastburn told PTI.

Aircraft Spots, a Twitter handle that monitors military air movements, had said that a US Air Force RC-135S reconnaissance aircraft from its base in Diego Garcia went "for a mission in the Bay of Bengal to monitor India's anti-satellite missile test".

This was interpreted by many that the US spied on India's ASAT missile test.

"I don't think that it implies coordination between India and the US," astronomer Jonathan McDowell from the prestigious Harvard-Smithsonian Center for Astrophysics told PTI on the Aircraft Spots report.

"This implies that the US intelligence community were aware of the test in advance because, to some extent, they're spying on India," McDowell contended.

"Everybody spies on their friends as well as their enemies. That's the way the world works these days. It would be surprising if the US were not detecting or observing the launch site and aware of activities preparing for the test. So one assumes that they knew it was coming," he claimed.

McDowell, who is a staff member at the Chandra X-ray Center and author and editor of Jonathan's Space Report, an e-mail-distributed newsletter documenting satellite launches, said he has not looked into the issue of the reconnaissance aircraft, but it is certainly not surprising that the US would fly a sensor aircraft to try and observe the test.

The Pentagon, however, strongly denied the spying allegation. "It's a relationship so strong that no topic is off limits," Eastburn said.

"Both nations enjoy shared principles regarding our respect of sovereignty, free and fair trade, adherence to international norms, and peaceful resolution of disputes," he said.

"First of all, we knew it was coming because of flight bans that India had announced and information they published previously. The launch occurred at 1.39am EST," he told members of the powerful Senate Armed Services Subcommittee on Strategic Forces during a Congressional hearing.

"First of all, it was detected, characterised and reported by Air Force Missile Warning systems and Airmen at Buckley AFB. Immediately after the test (it struck the target vehicle), the Joint Space Ops Center and USAF 18 Space control Squadron began collecting information about the breakup of the vehicle," Thompson said.

Prime Minister Narendra Modi had on Wednesday announced that India successfully test-fired an anti-satellite missile by shooting down a live satellite, describing it as a rare achievement that puts the country in an exclusive club of “space superpowers”.

The test made India the fourth country in the world after the US, Russia and China to acquire the strategic capability to shoot down enemy satellites.