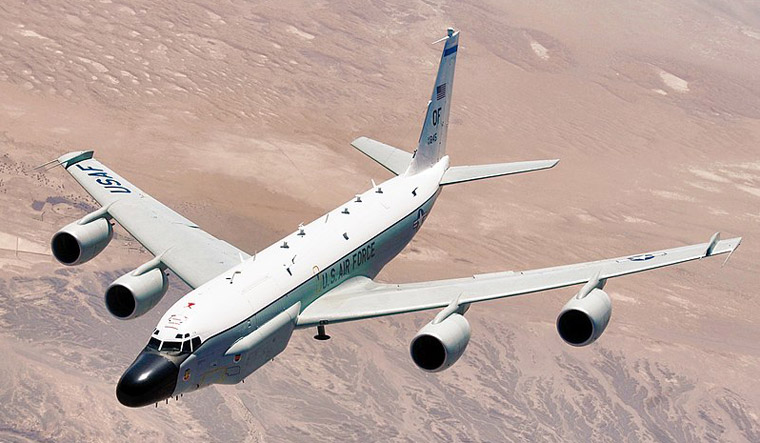 On Thursday, media outlets reported that the US Air Force dispatched an aircraft to monitor India's test of an anti-satellite missile, conducted the previous day.

The reports cited data from a civilian aircraft spotter on Twitter. The spotter, Aircraft Spots, tracked an RC-135S aircraft of the US Air Force and stated it departed from the US military base at Diego Garcia on “a mission in the Bay of Bengal to monitor India's ASAT anti-satellite missile test”.

USAF RC-135S 62-4128 CHAOS45 departed Diego Garcia at 2330Z for a mission in the Bay of Bengal to monitor #India's ASAT anti-satellite missile test.

While iconic aircraft like the U-2 and a host of unmanned aerial vehicles come to mind when one hears the word 'spy plane', the RC-135 and its derivatives are among the most sophisticated reconnaissance systems ever built.

The RC-135 is a four-engine aircraft derived from C-135 cargo plane of the US Air Force. The RC-135 first entered service in 1961 and has spawned multiple derivatives performing missions as varied as monitoring ballistic missile tests, communications, radars and air defences of potential enemies and even collecting atmospheric samples to detect traces of radioactive material.

A US Air Force fact sheet for the RC-135S variant, dubbed the 'Cobra Ball', describes it as being capable of flying “missions of national priority to collect optical and electronic data on ballistic targets”. The US Air Force notes the RC-135S has a crew of up to 10 people, including mission specialists, and is equipped with a “sophisticated array of optical and electronic sensors, recording media, and communications equipment”.

The RC-135S is capable of monitoring the trajectory of ballistic missiles being tested and relaying data back to agencies in the US. The radar, optical and infra-red sensors on the RC-135 are capable of detecting missile launches at great distances. These sensors are believed to have ranges of hundreds of kilometres, allowing the RC-135S to operate out of reach of potential enemy detection.

In February this year, Aircraft Spots reported on Twitter that an RC-135V variant, which is meant for detecting and analysing communications and signals, was spotted operating in the Caribbean Sea, off the coast of Venezuela even as the country was embroiled in a political crisis.

The various RC-135 derivatives have flown missions off multiple states seen as rivals of the US, such as Russia, China and North Korea, in the past six decades. According to official US Air Force documents accessed by War is Boring, RC-135U aircraft flew over 30 missions near China in 2010 alone to monitor radar sites, while RC-135S aircraft were also deployed to collect intelligence on possible missile tests.

The RC-135 has also been used to monitor missile tests by US allies such as Israel and even India. Documents accessed by War is Boring claim the RC-135S aircraft deployed to the Indian Ocean seven times in 2010, potentially to monitor Indian missile tests.

Interestingly, the US Air Force's fact sheet on the WC-135 claims the Bay of Bengal and the Indian Ocean were among the areas in which the aircraft “routinely conducted” air sampling missions!