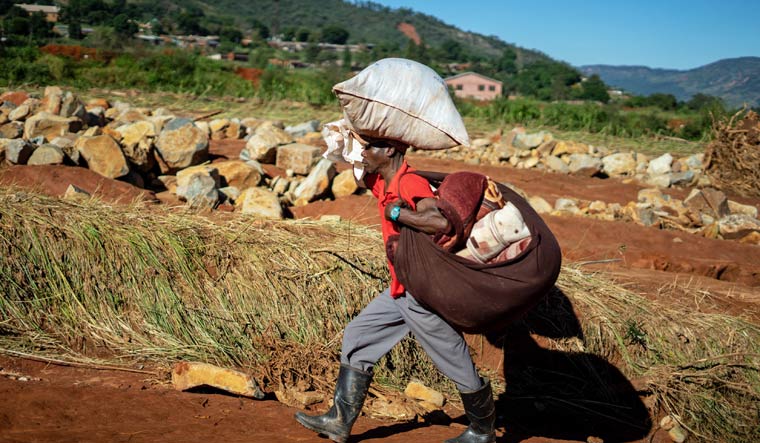 A man ladened with his belongings on March 21, 2019 arrives at Ngangu secondary school where families displaced by Cyclone Idai are sheltered in Chimanimani | AFP

A week after clyclone Idai lashed Southern Africa, Mozambique's President Filipe Nyusi believes that more than 1,000 people may have been killed. With towns and villages completely submereged there is fear that more may be dead.

Even as aid agencies and several governments continue to step up rescue operations despite helicopters in short supply for thousands displaced by the cyclone, bodies continue to be washed up.

“Most of the bodies were washed into Mozambique and because they were in a really bad state, they could not keep the bodies,” Defense Minister Oppah Muchinguri said, speaking in the eastern city of Mutare. “So they ended up burying them,” Meanwhile, the confirmed death toll in Mozambique rose to 217, and in Malawi, at least 56 people were killed. Homes, villages and entire towns were submerged under 19 feet water across central Mozambique, where flooding created a muddy inland ocean 30 miles wide. Stranded women are known to be throwing their babies into rescue boats and people are being pulled up from head deep waters.

According to the U.N. food aid agency, 400,000 people were displaced and “in urgent need of life-saving assistance” in Mozambique's coastal city of Beira and flooded areas along the Pungue and Buzi rivers.

The persistent rains lifted in some areas on Thursday, and floodwaters began to recede in Beira, the worst-hit city, and in the countryside, according to a Mozambican government report.

More than 200,000 people have been affected in Zimbabwe. Idai was one of the worst tropical cyclones ever to hit Africa and it has managed to destroy countless communities in its wake.

According to UN statistics, more than 80,000 people have been displaced.