George Bush, Nicolas Sarkozy and even Barack Obama have been Google-bombed 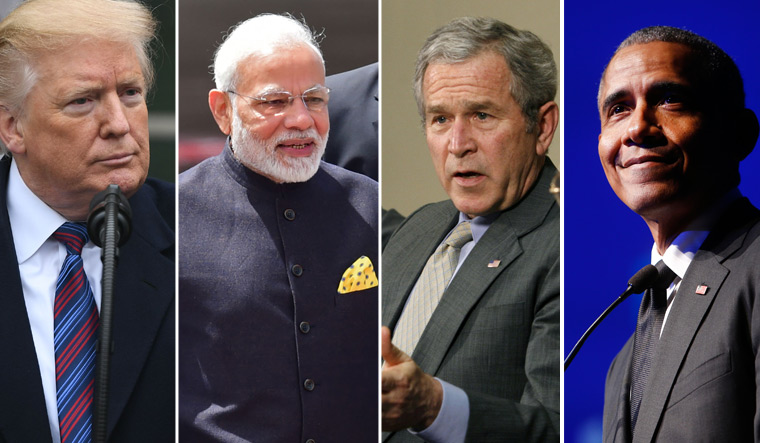 Many politicians have suffered the burns of Google bombs | AFP; Reuters; AP

While Google results can sometimes be entertaining, they can also be quite controversial. Politicians have always been the butt of a lot of jokes on the Internet, and Google bombs are increasingly becoming one of the most popular ways of doing so.

Google-bombing is the act of causing a particular search result to be shown higher in the list of results of largely irrelevant and inappropriate queries for comedic or political purposes. Known as ‘search engine bombs’ prior to when Google became the universal search engine, Google bombs gained mainstream popularity in 2007.

Listed below are 10 of the most prominent political Google bombs:

In July 2018, the leader of the free world President Donald Trump became a victim of the infamous Google bombs. A search for the query ‘idiot’ showing pictures of Trump led the Judiciary Committee to launch an investigation into the workings of Google and even called in CEO Sundar Pichai for a hearing.

2. ‘Top 10 criminals’ – Narendra Modi, along with images of terrorists

In June 2015, the query ‘top 10 criminals’ showed among a list of most wanted terrorists, dictators, and other criminals, the name and picture of Prime Minister Narendra Modi. Google was soon prompted to issue an apology citing incorrect information from a British daily.

During the months leading up to the presidential election in 2012, Republican nominee Mitt Romney showed up as the top result for the search query ‘completely wrong’. This occurred in light of some political comments made by Romney in a blog post in October, in which he stated that 47 per cent of Americans were “victims” and were dependent on the government. The ‘completely wrong’ string was linked with these comments due to Google’s algorithms picking it up from various news reports.

In July 2012, the search query ‘plagiator’, which is the Romanian word for ‘cheater’, yielded results showing then-Romanian Prime Minister Victor Ponta, whose PhD thesis was allegedly plagiarised. The row surrounding the thesis was widely reported in Romania at the time. The subsequent Google bomb resulted in it being a whole other news story itself.

During the 2004 presidential race, George W. Bush was infamously bombed on Google with the query ‘miserable failure’ linking to his official White House web page. It was one of the bombs that stood the test of time as it was only removed in 2007. The Bush bomb is still considered ‘legendary’ by netizens and political commentators alike.

In 2004, a law student from Duquesne University, Ken Jacobson successfully bombed then senator John Kerry by linking him to the search query ‘waffles’. This is said to be in response of the Democrats’ Google-bombing of George W. Bush which took place the same year. The term ‘waffling’ is used to describe a person who is incapable of sticking with one decision.

An April 2006 search for ‘buffone’, the Italian word for ‘clown’, linked to the website of then Italian prime minister Silvio Berlusconi, a man whose term in office had been mired in controversy since taking oath in 1994.

Soon after the former senator took office in 2009, amateur hackers had managed to redirect all of Obama’s predecessor Bush’s Google bomb links to his name. This meant search queries ‘miserable failure’ and even just ‘failure’ led to Obama’s White House page.

This literally translates to ‘asshole of the web’. The phrase was one of the search queries whose results yielded the then French president Nicolas Sarkozy’s website in 2009. In 2010, the same query showed the first result as Sarkozy’s Facebook page.