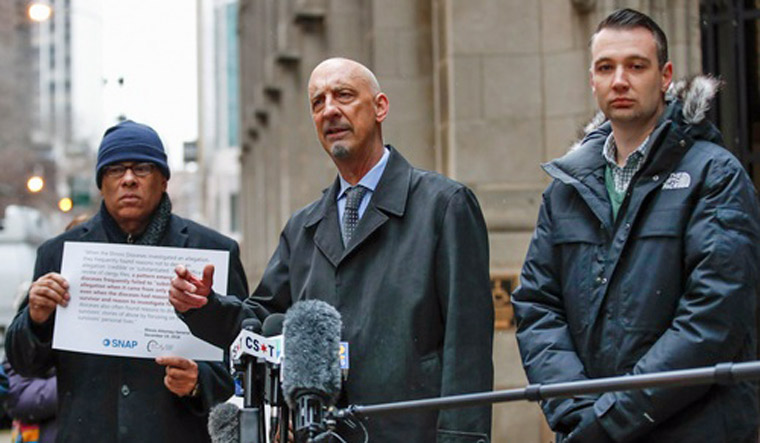 Peter Isely (C), US spokesperson for Ending Clergy Abuse, talks during the press conference outside the Archdiocese of Chicago | PTI

On Wednesday, 61-year-old Patricia Gallagher Marchant stood in front of a throng of news cameras outside the downtown Chicago headquarters of the Catholic archdiocese and demanded the church listen to survivors. Marchant was first abused by a priest who befriended her family when she was seven or eight years old.

"They've counted on our silence," Marchant said. "The horror of what happened to each of us needs to be out and spoken." Marchant was joined by leaders of two survivors' advocacy groups who sent an open letter to Pope Francis asking to be a part of a historic gathering that the Catholic leader called for in February at the Vatican, to discuss the ongoing crisis roiling the church.

The very credibility of the Pope's conference was questioned and whether the survivors would have faith in its outcome.

"What we want is for this summit to be able to be taken seriously and to result in real, meaningful reform," said Zach Hiner, executive director of the Survivors Network of those Abused by Priests (SNAP). Just as US bishops gathered at a Chicago-area seminary for a prayer summit in advance of the Vatican meeting, the demands came in. It came two weeks after the top prosecutor in the Midwestern state of Illinois, where Chicago is located, revealed hundreds of previously undisclosed allegations of clergy abuse.

The US Conference of Catholic Bishops was tight-lipped about the gathering, saying only that it would consist of seven days of silent prayer and reflection.

Two of the attendees were targeted by the activists in downtown Chicago for their key roles in the upcoming Vatican event: Cardinal Blase Cupich, the leader of the Chicago archdiocese, and US bishops leader Cardinal Daniel DiNardo.

Both were blamed for alleged cover-ups of clergy abuse under their watch.

"We're asking the pope to do something very simple: put individuals to lead your summit that have not covered up for child sex crimes," said Peter Isely, a self-identified survivor and spokesman for the group Ending Clergy Abuse (ECA).

"Then, survivors and the rest of the world might have a glimmer of hope." Survivors' advocates have long accused church officials of slow-walking abuse investigations and failing to disclose all allegations.

Marchant said her abuser was allowed to remain a priest for almost two decades after she first reported him.

"The church has a history of minimizing and denying the undeniable pain and horror of being sexually abused by a priest," said Marchant, who is now a therapist helping other clergy abuse survivors.

More than 500 additional accused clergy were uncovered by state investigators within months of looking into dioceses' records, according to Madigan, far more than the 185 names previously disclosed.

"There can be no doubt about the constant need to strengthen our culture of healing, protection, and accountability," he said in December statement.

The scale of the apparent cover-up in Illinois eclipsed the findings of a grand jury in Pennsylvania, which in August alleged more than 300 suspected predator priests and more than 1,000 victims had been concealed for decades.

In announcing the February meeting to discuss the abuse crisis, Pope Francis urged bishops to "reach out and visit with victims of sexual abuse... to learn first hand the suffering that they have endured."