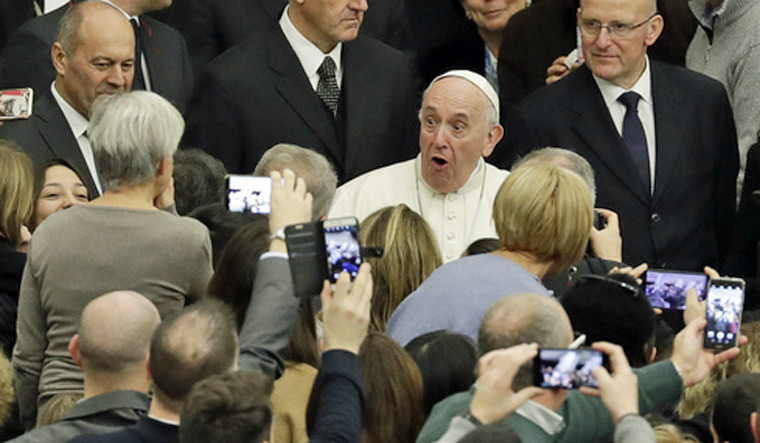 "The Church will never seek to hush up or not take seriously any case," the pope said in his annual address to the Church's governing Curia at the Vatican.

The Roman Catholic Church, which has 1.3 billion followers all over the world, was rocked by a litany of child sexual abuse scandals. On wednesday, the pope accepted the resignation of a US auxiliary bishop over his "misconduct" with a minor.

"It is undeniable that some in the past, out of irresponsibility, disbelief, lack of training, inexperience, or spiritual and human short-sightedness, treated many cases without the seriousness and promptness that was due.

"To those who abuse minors I would say this: convert and hand yourself over to human justice, and prepare for divine justice," the pope told Curia.

Even as a steady drip of charges continue to corrode the institution,  Francis has struggled to resolve the problem. But, fresh cases regularly surface against a background of sharp divisions in Rome over the issue.

The pope last week removed two prominent cardinals from his inner circle months after they were tainted by paedophile scandals and ahead of a Church-wide meeting on the "protection of minors" next year.

Australian Cardinal George Pell and Chilean Cardinal Francisco Javier Errazuriz were both removed from the so-called C9 Council of Cardinals, an international advice body set up by Francis himself, the Vatican said on December 12.

The last time the C9 met in September, Errazuriz, who is accused of ignoring reports of abuse in Chile, and Pell, who faces charges in Australia related to historical child sexual offences, were both absent, and the council said it was considering restructuring.

Despite being removed from the C9, Pell, 77, remains in charge of Vatican finances, the third most powerful position in the Roman Catholic Church.

The Church has been hit by a series of child abuse scandals in recent years, with widespread allegations of cover-ups, including against the pope himself.

The pope told the Curia on Friday that there were still "consecrated men... who abuse the vulnerable, taking advantage of their position and their power of persuasion." "They perform abominable acts yet continue to exercise their ministry as if nothing had happened. They have no fear of God or his judgement, but only of being found out and unmasked."