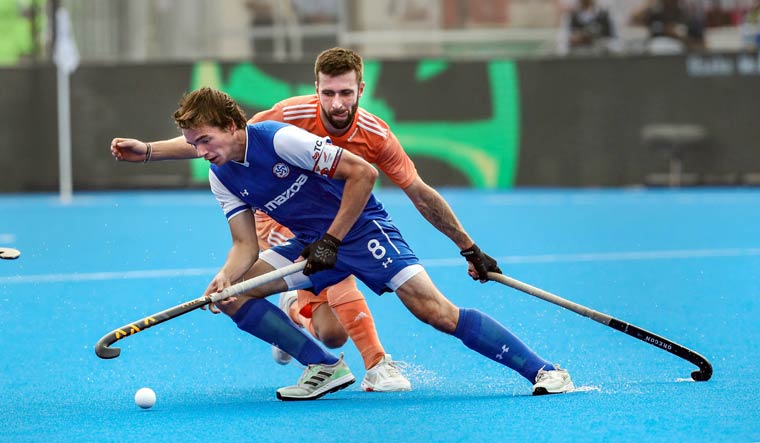 Players of Netherlands and Chile vie for the ball during their FIH Odisha Hockey Men's World Cup 2023 match, at Kalinga Stadium in Bhubaneswar | PTI

Three-time champions Netherlands registered a record-breaking 14-0 win over debutants Chile to secure a direct qualification into the quarterfinals, while Malaysia stunned New Zealand 3-2 to finish second in Pool C at the FIH Men's Hockey World Cup in Bhubaneswar on Thursday.

With three wins from as many games, Netherlands finished at the top of Pool C with maximum nine points, while Malaysia were second with six points from two victories.

In the second match of the day, world No.3 Netherlands toyed with Chile, ranked 23rd, and scored goals at will to register the biggest margin of victory in a World Cup match.

The record for the biggest margin of win in a hockey World Cup match was earlier held by world No.1 Australia, who thrashed South Africa 12-0 in New Delhi.

The Netherlands, who have won the World Cup thrice and finished runners-up in the last two editions, earned 18 penalty corners from which they converted six, while Chile got just two PCs in the match.

Lan's strike was also the 2500th goal of the World Cup.

New Zealand are third in Pool C with just one win, while Chile finished winless.

While Netherlands qualified directly for the last-eight round, Malaysia and New Zealand will play crossover matches to book their place in the quarter-finals.

The top teams from the four pools qualify directly for the last-eight, while the second and third-placed sides play in the crossovers matches to fill up the remaining four slots.

Chile will play in the fifth to 16th place classification matches.