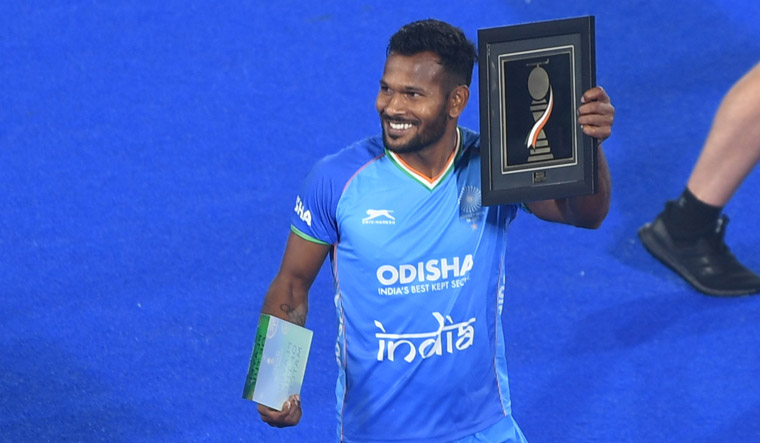 The International Hockey Federation (FIH) might be considering rule changes in penalty corner drag-flicks in view of safety issues, but India's first rusher Amit Rohidas is not concerned about the risk involved, saying he has no fear of being hit by the ball.

FIH president Tayyab Ikram said a few days ago in Rourkela - the World Cup co-host city - that the world body was doing a study on tweaking the rules related to penalty corner hits to provide more safety to defending players as the high speed ball travels in a crowded area.

Ikram had, however, made it clear that the FIH was not thinking of reducing the speed of the ball from the flick.

He said a solution could be found by having one or two more touches by the attacking team before the ball enters the circle, so that rushers can have more time to react.

Asked about the possible rule changes, Rohidas said, "I am not aware of what the FIH president said. But I have no fear of being hit by the ball. It has never come to my mind in the matches I have played so far.

"I have been one of the first rushers in the Indian team. Whatever and whenever the team wants, I can be the first rusher. I have no issues," the 29-year-old defender told PTI.

Rohidas was one of the first Indian rushers in the three penalty corners taken by Spain in the opening match at the brand new Birsa Munda Stadium in Rourkela. India did not concede any goal from PCs and won the match 2-0.

Rohidas was one of the scorers, slamming the ball home from a rebound from a penalty corner opportunity.

In the goalless draw against England on Sunday, India did remarkably well as they defended eight penalty corners without conceding a goal with midfielder and senior player Manpreet Singh being the first rusher on most of the occasion. Rohidas was the other first rusher in that match.

India had played crucial last few minutes with one man down due to cards in the last two matches and Rohidas said the team has been working a lot on how to deal with such a situation.

"It is not that we are getting cards just now. We have got cards in tournaments earlier also. We have worked a lot on this, on how we play in such a situation and the structure we will play etc."

He said India would look to score as many goals as possible against Wales in the last Pool D match at the Kalinga Stadium here on Thursday.

"It's an important match and we want to finish on top of Pool D. So, we will try to score a lot more goals," said Rohidas, who belongs to Saunamara village in Odisha's Sundargarh district which has produced more than 60 international players.

"But we will not take pressure and will play our normal game. Goals will come with that. We had played well against England and so we are confident. We will analyse video footage of Wales and plan accordingly."