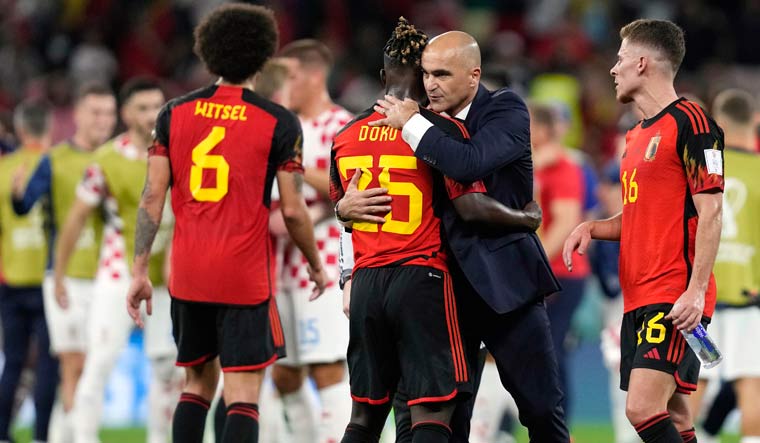 Belgium's head coach Roberto Martinez embraces Jeremy Doku after their team was defeated by Croatia at the World Cup, in Al Rayyan | AP

Belgium coach Roberto Martinez stepped down on Thursday following his team's first-round exit at the FIFA World Cup 2022 in Qatar.

"This was my last game as coach of the national team. That's emotional," he said, adding that he had already decided to end his six-year tenure and would have left even if they had been crowned champions.

"I can't go on. I said goodbye to the players and staff. I was going to stop anyway - whatever happened. Even if we had become world champions. I made that decision before the World Cup."

During Martinez's tenure as coach, Belgium rose to number 1 in world rankings and came third at the World Cup in Russia.

Belgium missed several chances against Croatia, to be held to a goalless draw and lose a golden chance to advance to the round of 16. They ended up third in the group, behind Morocco and Croatia.

It summed up a disappointing campaign in which they scored only one goal in three matches. Belgium are facing the breakup of its talented but underachieving squad after failing to live up to its status as the second-ranked team and one of the tournament favourites. What has long been called Belgium's Golden Generation - now featuring six players with more than 100 appearances - is set to split with the World Cup semifinal appearance in 2018 as its peak.

The team, which has faced reports of infighting and divisions between players during the tournament in Qatar, saved its best performance until its final match. It came too late.