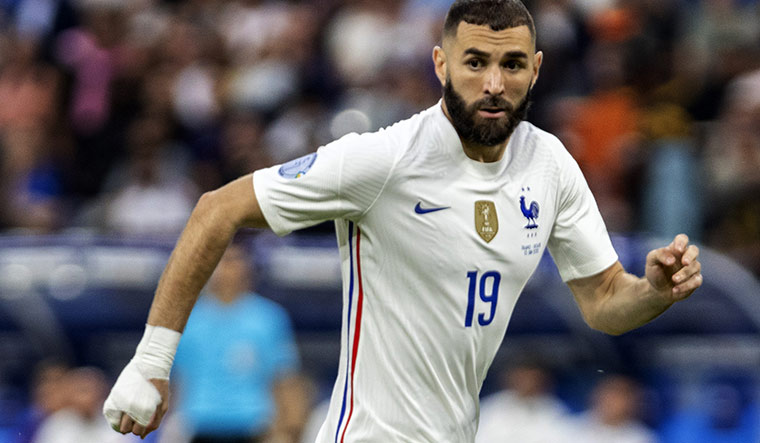 French striker Karim Benzema has been ruled out of the World Cup in Qatar after suffering an injury in training, according to French Football Federation.

Benzema reportedly had to leave Saturday's training session after struggling with a muscle injury, that had been tormenting him of late.

"I am extremely sad for Karim who had made this World Cup a major objective. Despite this new blow for the French team, I have full confidence in my group. We will do everything to meet the huge challenge that awaits us," coach Didier Deschamps' statement was quoted by Reuters.

The France Football Federation has confirmed the news on Twitter as well. A statement read that the Real Madrid striker was hit in the quadriceps of the left thigh. An MRI scan confirmed that he had a femoral rectus injury which would require a recovery period of three weeks, it added.

The French striker too posted on Instagram. "I've never given up in my life but tonight I have to think of the team, as I have always done," Benzema wrote in an Instagram post. "So reason tells me to give my place to someone who can help our squad have a great World Cup. Thanks for all your messages of support."

The 2022 Ballon d'Or winner's absence would be a huge setback for the team, which is already without midfielders Paul Pogba and N'Golo Kante. The team will open its World Cup campaign against Australia in a Group D match on Tuesday.

The Real Madrid star had a great season and scored 4 goals in 46 games, thereby propelling his team to a LaLiga and Champions League double.

Benzema has also had a great World Cup journey, being France's top scorer at the 2014 World Cup. But, he was not part of the winning team in 2018.