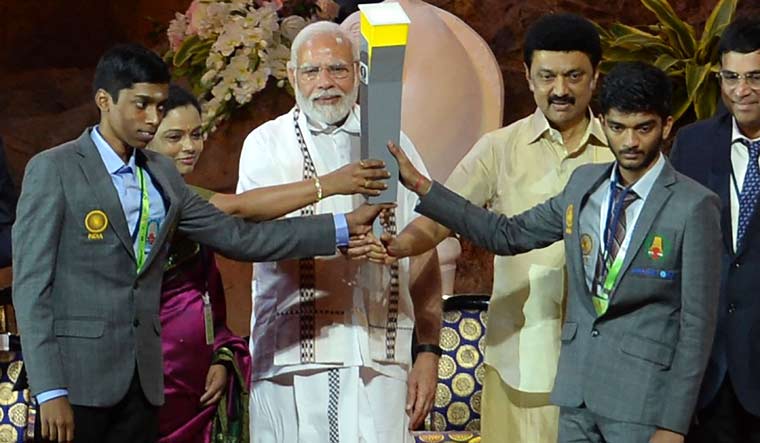 Pakistan said on Thursday that it will boycott the International Chess Federation event in Chennai citing the torch relay of the event passing through Jammu and Kashmir, a move termed by India as "highly unfortunate".

Pakistan was invited by the International Chess Federation (FIDE) to participate in the 44th Chess Olympiad scheduled to be held in Chennai, India, from July 28 to August 10.

“Regrettably, India has chosen to politicise this prestigious international sporting event by passing the torch relay of this event through Jammu and Kashmir,” Pakistan's Foreign Office said in a statement.

"Pakistan condemns India's mischievous attempt to mix politics with sports. As a protest, Pakistan has decided not to participate in the 44th Chess Olympiad and will also raise the matter with the International Chess Federation at the highest level,” it said.

Reacting to Pakistan's decision, Ministry of External Affairs Spokesperson Arindam Bagchi said it was surprising that Pakistan has suddenly taken the decision not to participate in the event.

“It is highly unfortunate that Pakistan has politicised the prestigious international event by making such statements and withdrawing its participation after its team has already reached India,” he said in New Delhi.

Bagchi asserted that the Union Territories of Jammu and Kashmir and Ladakh "have been, are and will remain an integral part of India."

Ties between India and Pakistan nose-dived after a terror attack on the Pathankot Air Force base in 2016 by terror groups based in the neighbouring country. Subsequent attacks, including one on an Indian Army camp in Uri, further deteriorated the relationship.

The relationship dipped further after India announced withdrawing the special powers of Jammu and Kashmir and bifurcation of the state into two Union Territories in August 2019.