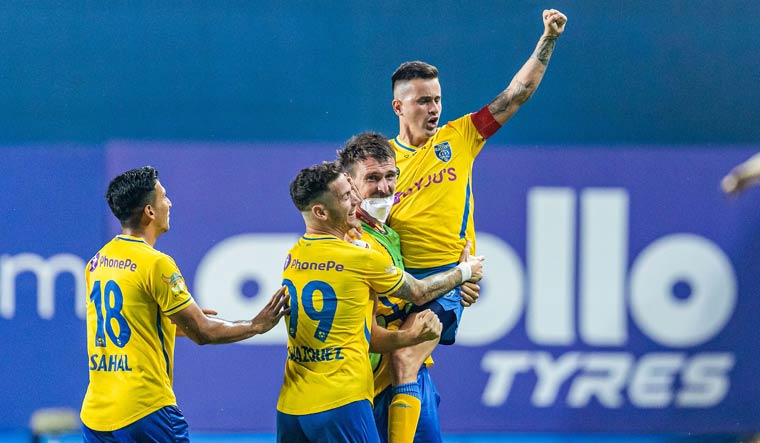 Adrian Luna of Kerala Blasters celebrates after scoring a goal in the Indian Super League match against ATK Mohun Bagan, at the Tilak Maidan Stadium in Goa | ISL/PTI

Kerala Blasters FC is happy to announce the contract extension of midfielder Adrián Nicolás Luna Retamar for two more years. The Uruguayan attacking midfielder, who had initially joined Kerala Blasters FC on a two-year contract, has penned an extension that will keep with the club till 2024, with the option to extend for a further year.

Luna started the season as club vice-captain and later replaced Jessel Carneiro as the captain of Kerala Blasters when the latter was out due to injury. Luna had 6 goals and 7 assists in his maiden Blasters campaign. Ever energetic and full of running, he was ranked high in tackles and ball recoveries in last year's Indian Super League. His contributions in both attack and defence also earned him a spot in the ISL Team of the Year.

Luna, who began his career in Uruguay, spent his academy years with Club Atletico Progreso, Montevideo Wanderers, and Defensor Sporting. It was at Defensor where he first advanced to the U-19 team, before making his first senior team appearance for the club in 2010. Soon, he was loaned to Spanish clubs Espanyol, Gimnastic, and CE Sabadell. The 29-year-old then moved to Mexico where he represented Tiburones Rojos and Venados FC. Prior to joining the Blasters in the summer of 2021, Luna signed for Australian outfit Melbourne City, making 51 appearances over two years for the Melbourne club.

Luna has also played in the FIFA U-17 World Cup in 2009, and the FIFA U-20 World Cup in 2011, scoring a goal each in both tournaments. In a club career spanning over 11 years, the attacking midfielder has made 364 appearances for all clubs, scoring 53 times and providing 53 assists.

“As I said last season, Adrián fits perfectly in the club and is one of the most valuable players in ISL. He has a great personality and he is a player who brought something special to our team. We are all delighted about his extension. I am glad that he will be in Kochi next season and I am certain he can’t wait to play in front of that Yellow Sea," said Kerala Blasters head coach Ivan Vukomanovic.

Further sharing his excitement with the extension, Kerala Blasters Sporting Director Karolis Skinkys said, “I'm happy that Adrián commits to our club for a longer period. Luna is a true leader, fighter, and big personality. We would love to have more players like him. The contract extension is a great achievement for the club and I would like to congratulate all the supporters behind it.”

“I am thrilled to be part of the Yellow Army and honoured to have renewed my contract with KBFC. My first experience in Kerala has been remarkable and I believe my next two years with the club will be tremendous. I hope to give my best performance in each game and to get the best for the team in the coming season” said Luna.

He was the first foreign signing KBFC made last season. This season, the club has already signed several new foreigner players like Victor Mongil, Ivan Kaliuzhnyi and Giannou Apostolos. KBFC has also announced numerous extensions during the off-season. Along with Luna, Blasters have now extended contracts of Bijoy Varghese, Jeakson Singh, Marko Lešković, Prabhsukhan Gill, Karanjit Singh, and Sandeep Singh. The preseason set to kick-off on Aug 1 in Kochi.