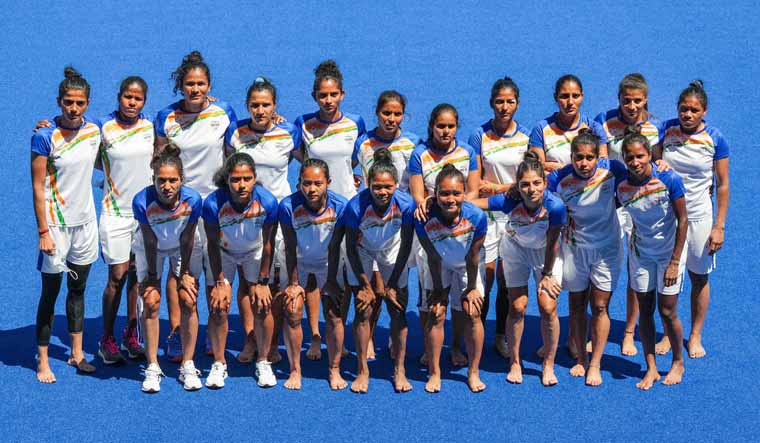 Riding high on the fine performance at the Tokyo Olympics last year, a confident Indian women's hockey team is all set to kick-start its 2022 campaign with the Asia Cup scheduled to be held from January 21 to 28 at the Sultan Qaboos Sports Complex in Muscat, Oman.

The team is led by goalkeeper Savita Punia in the absence of regular captain Rani Rampal, who is undergoing rehabilitation for an injury. Of the 18 players in the squad, 16 were part of the team that secured an unprecedented fourth-place finish at the Tokyo Olympic Games.

India are the defending champions and will battle it out against China, Indonesia, Japan, Malaysia, Singapore, South Korea and Thailand for the title. The top four teams from this tournament will qualify for the 2022 FIH Women's Hockey World Cup to be held in Spain and the Netherlands.

Coach Janneke Schopman said the girls, after experiencing the high of Tokyo, are back with their feet firmly planted on the ground, looking forward to important competitions this year.

“It was a bit challenging for the girls—they did not expect the amount of attention they received as team and individuals after the Olympics,” said Schopman. “We started the camp in September. The group is keen to play hockey and focus on what they need to do. I am quite happy with the way the girls have shown intent and progressed.”

She was confident that the absence of Rampal would not hurt India in the upcoming tournament, and expects the former to be fit by February or March for future events.

Captain Punia said the performance in Tokyo has only helped in adding to the players' confidence and motivation. “Post Olympics, we have focused on ourselves rather than other teams—we have been training with intent and focus, we got a lot of self-belief from our performance at the Tokyo Olympics.”

This year, apart from the Asia Cup, the Indian eves will be seen in action in the Commonwealth Games, Asian Games and the World Cup. Asked about how she sees the current year in terms of challenges, the head coach said: “We went to Tokyo without expectations. What we found was that there is a place for India at the [top] level but we need to improve for that. The girls don't want to be one-hit wonders. They want to continue to progress.” She added that even Asia Cup “has a qualification for the World Cup at stake”, and she wants to see how the girls are implementing the plans worked on in training.

It will no doubt be very difficult for the coach to pick and choose tournaments, but with games and events being affected by the pandemic worldwide, the girls are hungry for competitions, said Schopman. Thus, she wants to take it match-by-match for now.

Punia termed 2022 as a very important year for the team with the major events and Pro League matches also on the team's agenda. “The Asian Games is direct qualification for the Olympic Games and we will be playing in the Pro League for the first time. The team is fit and ready,” she said.

Even though the team has a new head coach in Schopman, who replaced Sjoerd Marijne, she is not new to the Indian team, having worked as the analytical coach under Marijne before taking charge. The 44-year-old Dutchwoman is a former player, who was part of the silver-medal winning team at the 2004 Athens Olympics.

“We want fit players. That was what [former scientific adviser] Wayne Lombard and I are about. He built a platform for us to work on. The way he taught the girls, they know what to do to be ready to play, recover and then be ready for the competition. We are all on the same page.”

Schopman said that the focus in training was on improving the defence. “We are incredibly skillful and good in goal scoring, but while creating more attacking options, we cannot leave open our half at the back. We have to have that defence standing tall—to keep other teams out of our circle.”