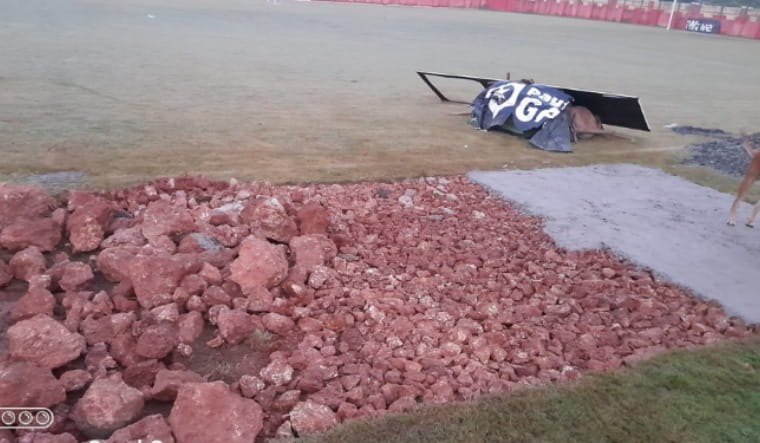 The dug-up pitch at the Salvador do Mundo Village Panchayat Ground in Goa | FCGoa.in

The training ground of Indian Super League team FC Goa has been allegedly dug up by the panchayat to make a cricket pitch, forcing the team to shift their training base in the middle of the 2021-22 ISL season.

The club has condemned the action, releasing a statement saying that it was a premeditated act of vandalism to gain “political leverage”.

“FC Goa condemns the acts of premeditated vandalism that took place on Sunday at the Salvador do Mundo Village Panchayat Ground, the Club’s practice ground since the start of the 2020/21 season by the members of the Panchayat led by newly elected Sarpanch, Antonio Fernandes,” read the statement.

The club had signed a three-year contract with the panchayat in May 2020 to develop the two adjacent training grounds as part of its larger initiative to create professional grounds for the growth of Goan football.

In return, the panchayat would give “exclusive access to the club to use the existing ground for its footballing activities”.

FC Goa claim to have invested almost Rs 1 crore on developing the two grounds—one for their own use and the other for locals—giving it the right to use the ground without payment for the first three years.

“On Sunday afternoon, without any prior intimation and in an attempt to gain local political leverage, the football pitch was desecrated as the turf was dug up and later filled with concrete. The actions have led to the damage of the drainage and watering facilities of the ground—making the place unfit for the footballing activities that were being carried out,” read the statement.

“FC Goa refuses to be intimidated by these acts and will endeavour to explore all legal options available to mitigate the matter at the earliest.”

According to The Times of India, the newly elected sarpanch of Salvador do Mundo Antonio Fernandes said it was the gram sabha that carried out the digging. “I am not involved. They have done it the way they wanted. The village boys have done it,” he said.

“They are training here for free. The panchayat does not get any revenue. They have invested for their own good and not for the benefit of the panchayat.”