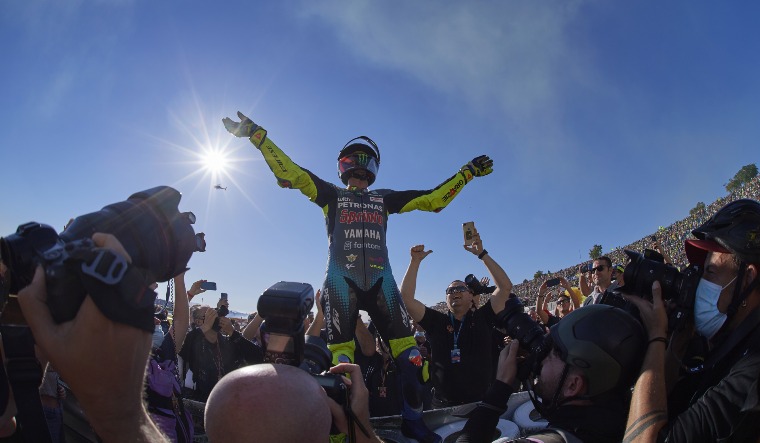 Valentino Rossi reacts after competing in his last ever race | Reuters

MotoGP legend Valentino Rossi has retired from the sport, crossing the finish line for the last time at the season-ending Valencia Grand Prix on Sunday. Rossi finished 10th in the race, bringing to an end his 25-year career. Rossi won nine world titles across categories—seven of which came in the premier class.

On his 432nd race start—a world record by a huge margin—Rossi started in 10th and held on to the position for only his fourth top-10 finish of this season.

It has been a difficult year for the 42-year-old with Petronas Yamaha, who finished 18th in the rider standings. Monster Energy Yamaha’s Fabio Quartaro had already secured the 2021 world championship a few weeks ago and finished 15th.

But it was the winner of the Valencia GP that made Rossi’s final race all the more significant—Ducati’s Francesco Bagnaia, once a protégé of the Italian and a product of the Rossi’s VR46 academy.

“I want to dedicate this race to him and thank him for what he has done for us at the academy,” said Bagnaia, 24, after the race, joining a chorus of tributes pouring in from not only the MotoGP community but from around the world.

Bagnaia even sported Rossi’s number 46 on his helmet, a number that Rossi has ridden with throughout his career.

It doesn't get any cooler than this! 😎@ValeYellow46 sits down with his 9 title-winning bikes 🙌#GrazieVale | #MotoGP pic.twitter.com/kXqbjdqYx7

Lewis Hamilton, Roger Federer and Tom Cruise were among those who paid tribute to the rider.

A 75,000-strong crowd cheered “Vale, Vale” as Rossi rode an ovation lap after the race, and he was mobbed by his team and fellow riders.

Before the race, Rossi was visited by Brazilian football legend Ronaldo, 20 years after meeting the player in Milan. Ronaldo would wave the chequered flag at the end of Rossi’s final run.

Rossi made his debut in the sport in 1996. He graduated to the premier class in 2000, winning the world championship the very next year. He won five consecutive titles between 2001 and 2005—coinciding with Formula One legend Michael Schumacher’s five titles from 2000 to 2004.

Rossi’s last world title came in 2009. He finished third in the 2018 season, too. But the last two seasons have been hard on him and so he announced his retirement from the sport in August.