After conceding the first two sets, Djokovic made a characteristic return to form 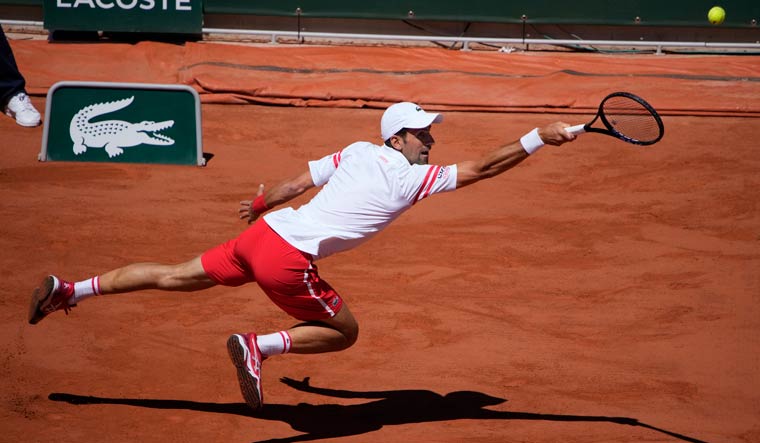 Serbia's Novak Djokovic reaches for the ball as he plays Stefanos Tsitsipas of Greece during their final match of the French Open tennis tournament at the Roland Garros stadium Sunday, June 13, 2021 in Paris | AP

The Greek Stefanos Tsitsipas faced off against the Serbian Novak Djokovic in the 2021 French Open men’s single final at the Roland Garros stadium on Sunday. For the 22-year-old Tsitsipas, it was his first Grand Slam final; for Djokovic, 34, his 29th.

This moves him within just one of the men's-record 20 accumulated by his two great rivals, Roger Federer and Nadal. But in one milestone, he surpasses them both: Joining only Rod Laver and Roy Emerson as the only men in tennis history to win each of the four major tournaments at least twice.

Staying true to form, both players started the match strongly, holding serve in the first set until 5-5. Then they broke each other's serves to take it to a tie-break. They continued to push each other blow for blow until Tsitsipas got the better of Djokovic to nab the first set. The Greek proved that he was going to be no pushover for the world number one in this final.

Tsitsipas continued his show of strength into the second set, breaking Djokovic early to storm to 6-2. He took advantage of the Serb's several unforced errors at the net. Moreover, Tsitsipas's superior stamina was evident as he covered more ground than his opponent, who looked exhausted at the end of the second set.

The age gap between Djokovic and Tsitsipas is the largest for a French Open men's final since Mats Wilander, 17, defeated Guillermo Vilas, 29, in 1982.

In typical fashion, Djokovic bounced back to lead 4-1 in the third set. Tsitsipas dug deep but Djokovic closed out the set 6-3. Djokovic was starting to get the better of long rallies though was still losing to the Greek's strong forehand winners.

Tsitsipas then needed medical attention on his back, giving him a much-needed breather, having lost the momentum. But it seemed like Djokovic benefited from the timeout more than his junior by 12 years. He dug into his reserve of strength and experience and looked sharper after the break to take the first four games of the fourth set.

Tsitsipas's injury was starting to reflect on his game. He started going for shorter points, attempting miscalculated winners and volleys that were resulting in unforced errors. Djokovic sensed blood and continued to punish the youngster with a better shot selection that stretched him. He took the fourth set facing little resistance. All of a sudden, as Djokovic has done so many times before, he had drawn level and enforced a fifth set.

The decider started off with both players revved and hungry. The high intensity was serving Djokovic well as he collected vital breakpoints with ease. With Djokovic 3-1 up, Tsitsipas had a look of resignation as he realised he was losing his focus and the plot with his unforced errors. He kept shouting to himself between points to summon the focus he needed. Unfortunately for him, he was up against the tried and tested mentality of the veteran.

Finally, after battling it out for four hours and eleven minutes, Djokovic emerged victorious in what he will remember as one of his most memorable fightbacks in a Grand Slam final.