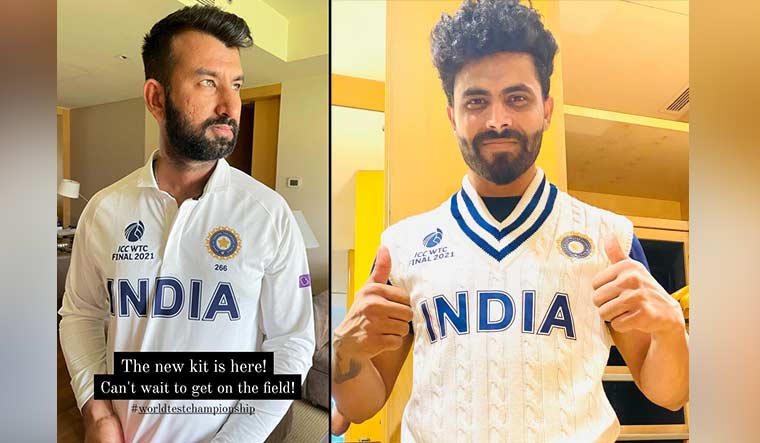 A day after Ravindra Jadeja revealed the design of the sweater Team India will be wearing at the finals of the ICC World Test Championship, Cheteshwar Pujara has shared a picture of the new Indian jersey.

“The new kit is here! Can’t wait to get on the field!” Pujara captioned his Instagram story, where he could be seen donning the kit.

In another post, Pujara could be seen shadow batting in his hotel room, while the team undergoes its mandatory 14-day quarantine ahead of its match against New Zealand in Southhampton between June 18-22.

Byju’s has sponsored the Team India Jersey since 2019. Earlier designs have been controversial: In 2020, a reveal of the Jersery for the T20 games had the Byju’s font overpowering the “India” lettering, leading to criticism on social media.

By contrast, the new design for Test jerseys has “INDIA” in much larger font.

Team India is currently undergoing quarantine in Mumbai before their departure for England. As part of a bubble to bubble transfer, the BCCI has acquired permissino from England and the Wales Cricket Board to allow players to train

Pujara captioned his pic, “When in quarantine, work from home! 😀”.

The final of the inaugural edition of the ICC WTC comes as India hold the number one position in the ICC Test Rankings. While Virat Kohli’s side have 121 points, New Zealand are not at all far behind, with 120 points. Kane Williamson’s team are set to play England in two Test games before facing off against India in a One-off test final.

While NZ will get to prepare and familiarise themselves with the conditions for the WTC final with two tests against England, Indian players were last in action in the IPL.