The incident happened ahead of the 47th National Junior Kabaddi Championship 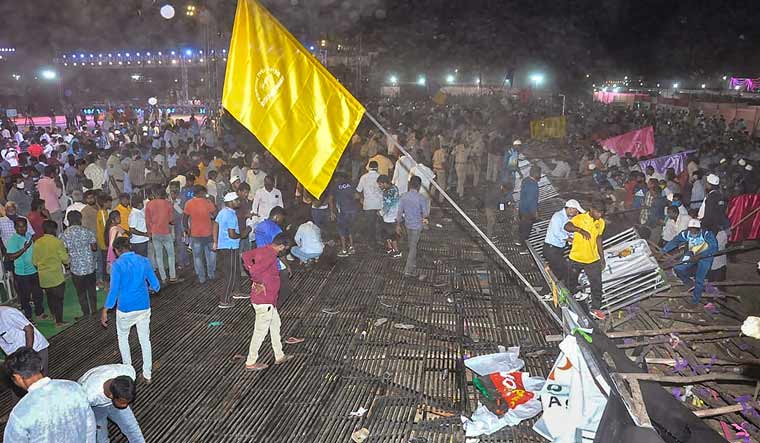 Spectators after a stand collapsed during the 47th Junior National Kabaddi Championship, in Surapet | PTI

More than 100 people were injured when a temporary stand collapsed ahead of a kabaddi tournament in Suryapet district of Telangana on Monday, police said.

All the injured were hospitalised. Of them, five or six suffered fractures. The severity of the injuries sustained by the others was yet to be known, the police said.

The incident happened at the SP Office grounds in Suryapet where a large crowd had gathered to watch the inaugural ceremony of the 47th National Junior Kabaddi Championship. Three temporary stands had been erected to seat the spectators.

Shocking & terrifying to see !!!
🔸Spectator gallery collapsed in kabaddi tournament in suryapet, Telangana.
🔸1200 members In gallery.
🔸My prayers are with the injured I hope everyone is safe 🙏#Kabaddi #suryapetaccident @RahulGandhi @priyankagandhi #telangana @INCTelangana pic.twitter.com/bgQSno24Zu

The exact cause of the mishap would be known only after investigation, the police said.

A footage of the incident was broadcast by local TV news channels.

The spectators were unable to move after the fall and were immediately taken to hospital by ambulances, police vehicles and other vehicles, a senior police officer said.

"We are monitoring the situation at both the gallery and at the hospital," Suryapet District Superintendent of Police R. Bhaskaran told PTI over phone.

Telangana energy minister G. Jagadeesh Reddy met the injured spectators at the hospital in Suryapet where they were admitted.