The team underperformed as a whole, the Lithuanian said 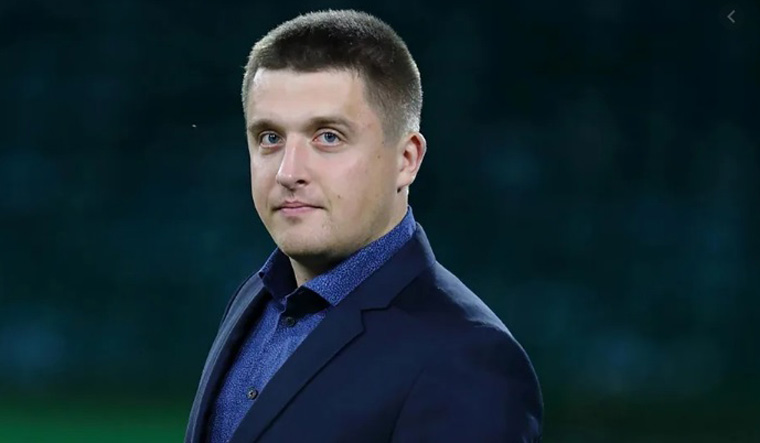 When Kerala Blasters appointed Karolis Skinkys as sporting director in March last year, after yet another disappointing ISL season, fervent fans of the club hoped for a change in fortunes. Another season later, the club's fortunes remain largely unchanged, having finished 10th in the 11-team tournament.

True to its 'tradition', Kerala Blasters parted ways with their coach—it was Kibu Vicuna this season, and their ninth coach overall—once their play-off hopes were over. Skinkys's appointment had raised hopes of a more professional approach, with a longer run for the coach irrespective of the club's points table finish.

Soon after Vicuna's exit and the 0-4 thrashing at the hands of Hyderabad FC, we caught up with the Lithuanian to find out what's ailing the team and the way forward, and more. Excerpts:

You had said in June last year that the sporting director is accountable if the team falters. What went wrong?

It was chain of small events. The team underperformed. In my opinion, not enough attention was paid to our defensive organisation. We started the season with the idea of playing attacking football. But, soon we saw that the team was not ready for that and we probably had to be more defensive. The circumstances of this year were also unusual—the coach was able to participate in trainings only three weeks before start of the season. So, we didn’t have the best start to the season. Ultimately, the defensive organisation hurt us.

Sandesh Jhingan's departure hurt, you had admitted. Why did the club fail to find a suitable Indian replacement?

We gave a chance to Sandeep Singh, who had a good season in the central defender position and as a right-back. I have no doubts that he has the potential to be an important player at the club and for the national team. I am happy that our scouting system was able to sign Sandeep. It is only his first season in ISL and he needs to continue working hard.

But Kerala Blasters still lacked quality Indian defenders, when compared to other teams. Vicuna even tried out Jeakson Singh in central defence. Your thoughts.

As I mentioned, this was also related to our right-back problem. Jeakson can play in central defender position and this experience will be useful to him. Perhaps, Jeakson could have continued in the midfield where he was doing really well. But what happened, happened. Now is not the best time to come back and discuss small details. Ultimately, the team underperformed as a whole.

Despite clear weaknesses in the backline, Blasters did not bring in any new defenders in the January window. Why?

We had a discussion about which position to fill. It was a pity we lost Sergio Cidoncha, who was also a leader in the dressing room, to injury. The coach requested for a player like Juande—a number 6 with the ability to play as a central defender. Also, the people who keep a close eye on our team, would have seen that in the first part of the season, the defence suffered the most from individual mistakes. In the second part, the problems were organisational. In my opinion, the individual quality of defenders was enough to perform way better. We can see this in some individual statistics tables but, as a group, we did not perform well.


Blasters dropped points from winning positions several times this season. Was it lack of competence of the players to fight till the end? Was there a psychological hurdle?

That starts from the team’s organisational issues. If you trust your connections, teammates behind or in front of you, you feel stronger. We almost always fought till the end but the mental strength was low. We tried different meetings, personal conversations, and team building days but, my opinion is that it depends on confidence in the system on the field.


There are allegations that Vicuna failed to motivate the defenders, and failed to explain his philosophy and style of play to them.


Critics asking these questions are probably not sure how professional football works. How can you fail to motivate the defenders but be able to motivate the midfielders? So, I have nothing to say on this. Philosophy and main principles of games were explained by Kibu even before the preparations on video meetings with the team. It’s not so difficult to understand.

The fact is that defensively our team was not organised well and we did not function well enough as a group. Every member of the team has to share the blame for this.


Vicuna helped youngsters like Sahal Abdul Samad, Rahul K.P., Jeakson and Sandeep with their game. But do you think the club was able to give him the best players?


Kibu is a good professional coach and a great person. He was doing some good things here. However, things didn’t work out for him. It was a difficult year to work in and the circumstances were not easy but our focus is on results. I believe that the players recruited were enough to achieve better results. But don’t get me wrong, the coach is not the only one guilty in this. Just that, after such a disappointing season for both parties, it’s better to try different things.

When did Vicuna express his desire to part ways?

There is no point going into the details. Fundamentally, the results and position on table were not good enough and we spoke with Kibu about this. We appreciate his honesty in understanding this.


Fans are worried about Blasters' tendency to rebuild the team ahead of each season. Is another complete overhaul on the cards?

We have a strong core of players under long term deals. We have targets and plans to reach these targets. So, our supporters should not be afraid that the changes of coach will cause the club to collapse and force a complete rebuild. At the same time, we should not be afraid of some player changes. Even for a winning team, it is normal to reconsider 30-40 per cent of the players after the season. In this way, you can keep the competition between players alive and push them to reach their potential. I’m not saying such changes will happen but, change is not always bad. This will be clearer in time.

It has been your first year in Indian football. How has it influenced you? Has it changed your philosophy on player recruitment, and selection of a head coach?

Yes, I evaluate some things differently now than I did a year ago. There are clear attributes we will be looking for in players. We need to build a team which can fit best in ISL. So, a clear plan is there but I don’t think that it is best time to tell these things in public.