Kibu Vicuna did not last a season with Kerala Blasters 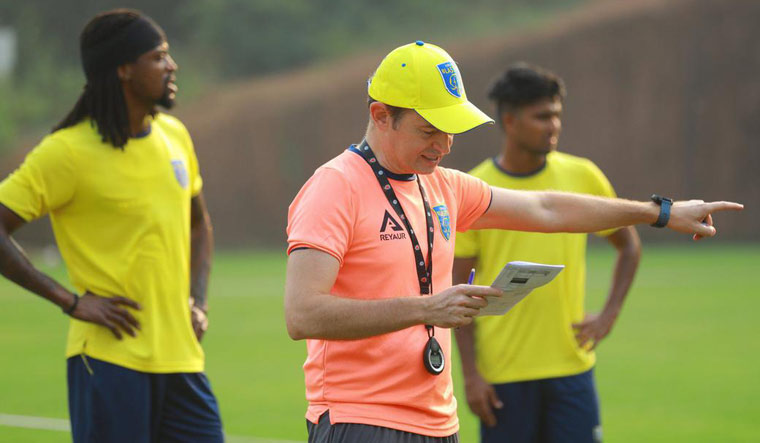 On Tuesday night, following their 0-4 loss to Hyderabad FC, rumours were rife that Kerala Blasters were expected to part ways with their Spanish head coach Kibu Vicuna. It became a reality on Wednesday as Blasters issued a statement saying the club and coach had agreed to part ways by mutual consent.

However, there are clear indications that the Spaniard was fed up with the current situation at the club and had made up his mind to leave then and there.

The four second-half goals conceded by Blasters in the do-or-die match against Hyderabad FC, that virtually knocked them out of play-offs contention, hastened his decision to leave midway through his two-year contract at the club. “This will be my last match,” the 49-year-old was quoted as saying before the game.

Reasons why he had to quit

Blasters are currently placed 10th in the 11-team ISL table with 16 points, 20 points behind leaders ATK Mohun Bagan. In the 18 matches so far, they could win only three while losing eight and drawing seven. They also have the second worst goal difference (-11) in the league.

Kibu had maintained that he was unhappy with the quality of the players available for selection. He did not have much say in the selection of most of the players as they were recruited much before his arrival. There were only two foreign players handpicked by him: Spanish midfielders Vicente Gomez and Juande Lopez.

The latter, who was brought in as a replacement for the injured Sergio Cidoncha, did not live up to his billing as he recorded only seven interceptions, five clearances and 268 passes in eight matches. Vicente was pretty impressive in the midfield. Former Celtic striker Gary Hooper, who struggled to score in the first half of the season, found his touch after a change of position. However, the coach was not able to fix the defensive issues of the team.

"Our scouting of the players was bad, the plans and expectations for the season were higher than the reality. My parents taught me to be responsible for what I'm doing so I always give all my heart to it, but also give no excuses," said a visibly shaken Vicuna after the game against Hyderabad.

"I want to thank all the management, players, coaching staff and members of the club for their professionalism, kindness and closeness. I want to express my gratitude to all the fans for their support since the first till the last day, which makes you exceptional and amazing. I wish all of you and the club all the best in the future. You deserve it," he added.

Vicuna was the ninth coach to leave the seven-year-old club. Six of them were fired midway into a season, which is the most by any team. Among them only three—David James (2014), Steve Coppell (2016) and Eelco Schattorie (2019-20) could last a full season.

The following are the coaches who were hired and fired by Blasters:

One of the names which has suddenly cropped up as a possible candidate to replace Vicuna is Spaniard Carles Cuadrat, who last managed Bengaluru FC. He is somebody who enjoys celebrity status in Indian football, and is way ahead of his counterparts in terms of tactics and strategy. As a player, the 52-year-old was a defender for FC Barcelona as well as the Spanish youth teams.

The franchise is expected to name the new manager by mid-March. Assistant coach Ishfaq Ahmed has been appointed as interim manager for the remaining two games.