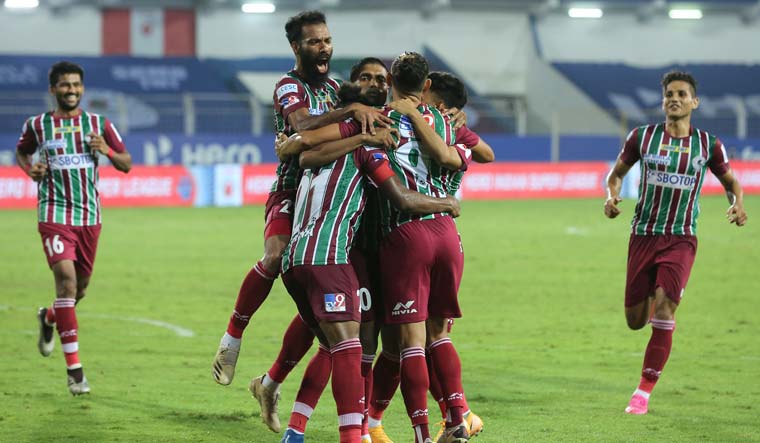 Already out of the play-offs reckoning, a beleaguered SC East Bengal would look to spoil arch-rivals and leaders ATK Mohun Bagan's party when they face each other in an Indian Super League match on Friday.

As the Kolkata derby marks its 100th year, since the Cooch Behar Cup in 1921, SC East Bengal and ATK Mohun Bagan find themselves in contrasting positions in the ISL table.

ATK Mohun Bagan, impressive from day one of the season, are at the very top of the table and are favourites to walk away with the League Winners' Shield and an automatic group stage berth in the AFC Champions League next season.

SC East Bengal, on the other hand, are out of contention, unable to recover from a poor start to the season despite improved displays in the second half.

As the two teams take on each other in a landmark Kolkata derby at the Fatorda Stadium, a lot more than three points will be at stake.

For Robbie Fowler, who will be watching from the stands as he is serving a four-match suspension, and his team, it will be an opportunity to give their fans something to brag about in a season where they haven't had too many chances to do so.

For Antonio Lopez Habas and his players, a victory is essential in their march to the title.

In any other year, this would be a fixture witnessed by a packed Salt Lake Stadium. This time, the stands at the Fatorda will be empty, but two of the biggest fan bases in the country will be watching with bated breath from their homes.

Throughout the season, the Mariners have been more consistent, scoring more and conceding fewer goals compared to their rivals.

After 17 games, ATKMB (36 points) have secured more than double that of East Bengal's points tally (17), highlighting the gulf in class between them.

However, despite the contrasting fortunes of the two teams, ATKMB head coach Antonio Habas said that the derby was different from other games.

“The derby is different. The attitude (of players), the level (of pressure) is different than other matches because you have the possibility to change the season with one victory. It's a dangerous match for us,” said Habas.

For East Bengal, the derby presents an opportunity to set a marker for next season. They came into the tournament much less prepared than others and that showed in their early displays.

However, a much better second half of the ISL has given them something to build on for the next season.

“This derby has got a lot of history and memories. We know how much the derby means to the people. The first derby was a bit unfair on us but now it's a bit of an even playing field. Hopefully, we can do our fans proud.”