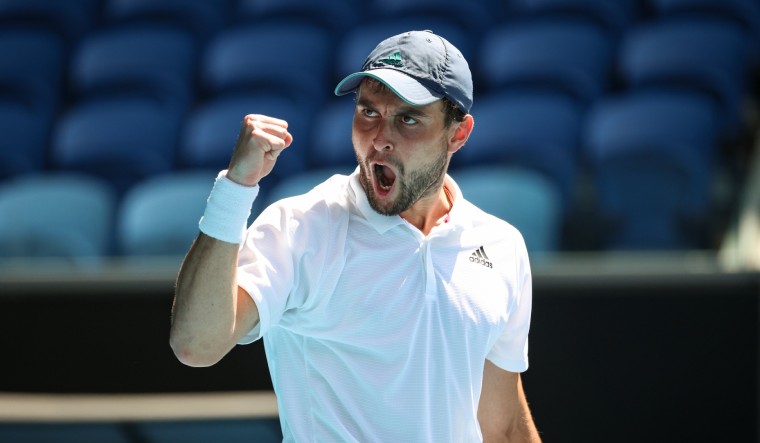 Russian tennis player Aslan Karatsev became the first man in the Open era to reach a grand slam semifinal on debut after he defeated Grigor Dimitrov in the quarterfinals of the Australian Open on Rod Laver Arena on Tuesday.

Karatsev overcame the challenge against an injured Dimitrov and won the match in four sets—2-6, 6-4, 6-1, 6-2. He will face wither men’s world number one Novak Djokovic or sixth seed Alexander Zverev in the semifinal.

Dimitrov, who was grimacing with pain from the third set, called for a medical timeout and was reported to have “spasms”. A trainer gave the Bulgarian treatment to his lower back. He returned to play, but was struggling through the rest of the game.

After the match, Karatsev said it was an “unbelievable feeling” to make it to the semis on his first attempt.

“Unbelievable feeling, first time in semis. Incredible,” he said. “It was tough at the beginning for me to hold my nerves, but I tried to find a way to play.”

Dimitrov served to love to open but the Russian broke for 2-1. The 18th seed Bulgarian levelled then broke again for 4-2, winning five games in a row to take the opening set in just 33 minutes.

However, Karatsev broke for a 3-2 lead in the second on the back of a wild Dimitrov volley then breaking again to unexpectedly secure the second set.

Dimitrov started showing his frustration at this point and went 3-1 down in the third set. He was forced to take the medical timeout as the set proceeded and he could barely serve at 1-5.

Struggling in the fourth set, Dimitrov found it hard to chase returns as weariness caught up to him and Karatsev sealed the match and ensured his entry into the last four.