Germany, who needed a draw to progress to the semis, suffered its worst defeat 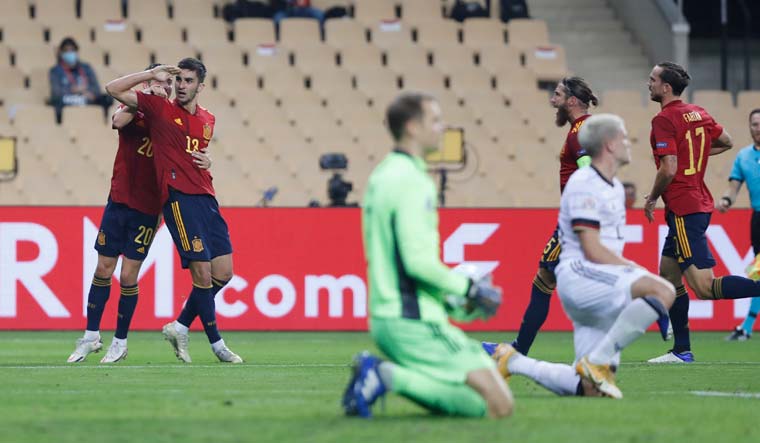 Germany suffered its worst defeat in recent times as Spain thrashed the side 6-0 in the Nations League on Tuesday to storm into the semifinal. Forward Ferran Torres scored a hat-trick for Spain with Alvaro Morata, Rodri and substitute Mikel Oyarzabal each contributing a goal.

Germany looked helpless as Morata, Ferran and Rodri gave Luis Enrique’s side a 3-0 lead by halftime. Ferran scored again in the 55th and 71st minute to further the lead before Oyarzabal finished with a goal in the 89th minute to crush the visitors.

“We walked all over them in every sense. We scored six but it could have been far more. We are still a group with little experience but this will give us a lot of confidence,” Rodri said after the match.

Morata pointed out that the win was crucial to silence Spain’s critics following their 1-1 draw against Switzerland last week.

“We had the opportunity to send a strong message out to the whole world and we have done just that,” he said.

Spain have now finished top of League A4 with 11 points after six games, joining France in the final four tournament, which will take place in October 2021.

Germany, who needed a draw to progress to the semifinal, have had a rough year, winning only three of their last eight matches. German national team director Oliver Bierhoff has shot down specualtions that coach Joachim Loew would remain in charge.

“Absolutely, yes. This game changes nothing. We still trust Joachim Loew, no doubt about that,” he said.