The West Indian great scored 99 off 63 balls, with eight sixes and six fours 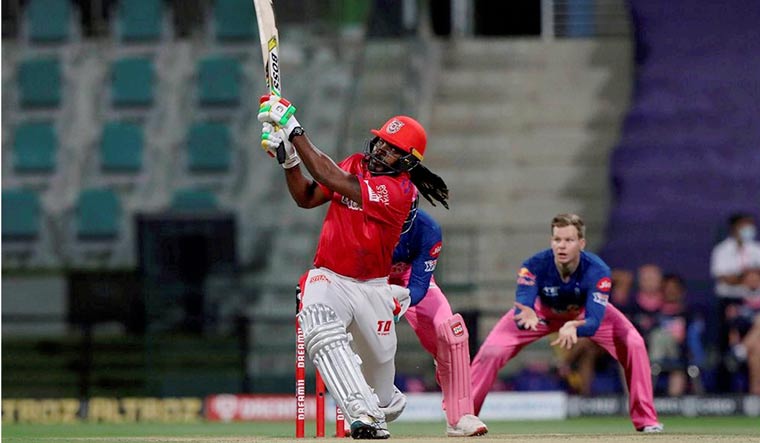 Chris Gayle of Kings XI Punjab plays a shot during the IPL 2020 match against Rajasthan Royals at the Sheikh Zayed Stadium, in Abu Dhabi | PTI

Chris Gayle continued his menacing form, smashing a 63-ball 99 to steer Kings XI Punjab to 185 for 4 in their Indian Premier League match against Rajasthan Royals in Abu Dhabi on Friday.

Gayle and captain KL Rahul (46) took the RR bowlers to the cleaners, stitching 120 runs for the second wicket in 13.4 overs to help KXIP post a challenging total after being put in to bat.

Nicholas Pooran played a late cameo of 22 off just 10 deliveries with the help of three sixes.

Gayle, who had four boundaries and eight sixes in his explosive innings, was out just two balls before the end of the innings and he showed his disappointment of missing out on a hundred by throwing down his bat.

During his knock, Gayle took his tally of sixes to 1001 in his glittering T20 career.

KXIP lost their first wicket in the opening over itself when Mandeep Singh got dismissed for a first-ball duck with Ben Stokes taking a brilliant diving catch off an equally superb delivery by Archer.

But Gayle and Rahul maintained a high scoring rate, reaching 53 for 1 at the end of powerplay. The self-styled 'Universe Boss' smacked two fours and six in consecutive deliveries off pacer Kartik Tyagi.

Gayle reached his third fifty in six matches in this IPL in style, hitting a six off Rahul Tewati in the 11th over as KXIP cruised along to reach the 100-run mark in the 13th over.

Stokes finally got the breakthrough by getting rid of tournament's top run-getter Rahul in the 15th over to put brakes on KXIP innings.

Rahul, who was playing second fiddle to Gayle, could not clear the ropes as Tewatia took the catch near the boundary.