Is it game over finally for Dhoni? 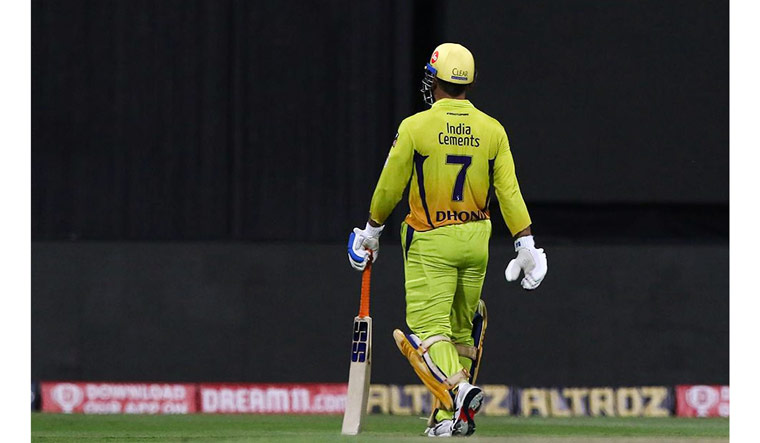 Mahendra Singh Dhoni walks back to the pavilion after getting dismissed during the IPL 2020 match against Rajasthan Royals, at Sheikh Zayed Stadium, in Abu Dhabi | PTI

On a flight to Melbourne to play the Benson and Hedges World Cup final ‘92, Javed Miandad was seated next to Steve Bucknor, one of the umpires to officiate in the final. The story goes that Miandad had done enough during the flight to convince the Jamaican how racist the British were! And the result? Bucknor refused to raise his finger when the world seemed to be convinced that Javed was plumb in front facing the English fast bowler Derek Pringle in the final at the MCG! While it remains an uncorroborated story, there have been numerous instances of the umpires being ‘influenced’ by players. One can readily recollect many occasions when the umpires have been bullied by the ‘stars’. So, it was nothing new when M.S. Dhoni ‘bullied’ the umpire to abort his action of calling a ‘wide’ in a match against Sunrisers Hyderabad last week. What was surprising though was to see someone of the stature of Paul Reiffel, who played 35 Test matches for Australia and also a World Cup winner, succumbing to such pressure tactics.

One has also heard even commentators rather nonsensically remark “The umpire has to ensure that he gets it absolutely right because the batsman is Sachin Tendulkar”. Should it matter to the umpire if the batsman is Tendulkar, Brian Lara, Virat Kohli or I? Ideally, it shouldn’t. Bishan Singh Bedi, never one to mince his words, has always been critical of not just the ‘star-struck’ umpires but also the scribes who often hold themselves back from expressing their honest views against the erring superstars. He was particularly critical of the establishment for letting Dhoni off with a 50 per cent match fee fine and also of the media for not voicing their opinion against it when Dhoni found himself in a controversy when he barged on to the field from the dugout to argue with the umpires over a no-ball, in the last year’s IPL.

One gets the feeling that the reactions to Dhoni’s ‘bullying’ act this time have been a lot stronger, despite it being a relatively lesser ‘offence’. Perhaps, an underperforming ‘Captain Cool’ and CSK have contributed to it.

The point of interest was to see what effect the long lay-off (He hadn’t played any serious cricket since the World Cup semifinal against New Zealand in July 2019) would have on Dhoni. The break would have either refreshed him and set him up nicely for the tournament, or would have left him rusty and short of confidence. As it has panned out so far, it seems more like the latter, sadly. The champion team from Chennai has never found itself in such a situation in any of the previous editions of the league. It’s a different experience for Dhoni who has possibly never gone through such a phase before. Hailed as one of the fittest cricketers, it was indeed a new experience for the fans to see Dhoni huff and puff the way he did in the match against the SRH when he struggled to run between the wickets and took frequent breaks. Age, after all, catches up with everybody.

Culling talent at the right time is as important as promoting it and that’s something which is still an alien concept in Indian cricket. Many of our cricketing icons have overstayed and, in a few cases, the establishment itself has looked helpless or reluctant to take firm steps. Knowing when to cull a talent and promote its successor is something that Cricket Australia seemed to have done exceptionally well during the phase when they dominated world cricket. That’s why we didn’t see Steve Waugh leading his team to a series win India in 2004 because he was clearly told that he wouldn’t last that long and that Ponting was ready to take over. The terrific wicketkeeper batsman Adam Gilchrist received a clear message that his time will be up soon when he showed the first signs of decline.

Dhoni, true to his personality, walked away from Test cricket in 2014 in the most uneventful manner and six years later, chose Instagram to announce his retirement from all forms of limited overs international cricket. But, will it be as easy for him to disconnect himself from the Chennai Super Kings? He has been seen getting emotional talking about the franchise, something one has never got to see when he captained India. Although he and his family members have been trolled in the most appalling, uncivilised and unacceptable manner on social media for the franchise’s lacklustre performance, the people of Chennai will also find it difficult to move on from their Hindi speaking ‘Thala’ . It has become such an emotional bonding.

Dhoni might still turn around his and his team’s fortunes although many wouldn’t be willing to have their bets on it at the moment. But, if he does manage something like that, it would be a perfect gift to a city which has borne the brunt of the global pandemic in a big way. If that doesn’t happen, perhaps it’s time for a complete end to an era and the man himself would know it better than anyone else.