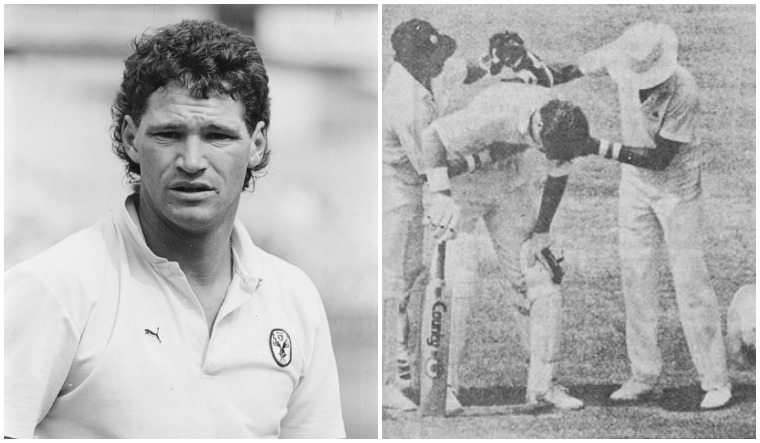 In cricket, Australians have always been tough nuts to crack. Dean Jones belonged to that breed.

The former Aussie cricketer and commentator passed away in Mumbai today because of cardiac arrest. Jones was part of the Star Sports IPL 2020 commentary team and was, reportedly, in a bio-secure bubble in a hotel in the city.

The 59-year-old will always be remembered as an aggressive player who redefined one-day cricket. He leaves behind invaluable memories and innings, but none as defining as the double century he scored against India in the 1986 Test match in Chennai (then, Madras), in sweltering heat and unbearable humidity.

It was the first Test of the three-match series. Jones had played only two Tests before this—against the West Indies. His scores read 48, 5, 1 and 11. It came as a surprise to many that Australian captain Allan Border not only included the young Dean Jones in the playing XI, but also sent him out to bat at no. 3. Opener Geoff Marsh departed with the score reading 48. Jones then joined forces with the legendary David Boon (122), and stayed unbeaten on 56 at stumps on day one.

Such was the pressure, that Jones, in his own words, was so nervous that he did not drink water overnight, he told ESPNcricinfo. He just had tea or coffee. The players had little idea about dehydration and rehydration back then, he later admitted. He managed to score a century, but the weather had started to take a toll on his health. He said in the interview that he did not remember a thing from that famous innings once he crossed 120. Jones, however, soldiered on.

His determination left the Indian team mightily impressed, and a trifle worried, too, about his health. Ace Indian spinner Maninder Singh, who was part of that Indian XI, is yet to overcome the shock of Jones’s sudden demise. “Somebody who was so full of life, forever smiling… I just can’t believe it,” Singh told THE WEEK. “I usually jog for around 20-30 minutes in the evening, but today I jogged for almost an hour. I never realised it, I was just thinking of Dean Jones.”

Singh watched in awe as the epic innings unfolded at the MA Chidambaram stadium with the temperature hovering over 40 degree Celsius and humidity well over 80 per cent. “Honestly, I became a fan of him during that innings. It was so hot and humid. Jones was vomiting, dehydrated, but he did not want to go out. He was such a tough competitor and mentally so strong.”

Singh went wicketless in the first innings, and the whole Indian team was surprised how effectively Jones countered the spinners. “Jones took us all by surprise; the way he used his feet against the spinners, and the positive frame of mind he batted with,” Singh said.

Jones lost control of his bodily functions, vomiting several times and even urinated involuntarily in his pants. He went to tea, unbeaten on 202. Jones did not want to get back on to the pitch after the break, but Border’s famous taunt—“Well go on, off you go then. We’ll get someone tough out here. We’ll get a Queenslander”—spurred Jones, who was from Victoria, into going back into the boiling cauldron that the MA Chidambaram stadium was back then. He was finally dismissed for 210, but the innings had become part of cricketing folklore. Soon after the innings, he was rushed to the hospital and put on saline drips.

Australia declared on 574/7 in the first innings. In reply, India were all out for 397, with skipper Kapil Dev top-scoring with 119. Australia then declared their second innings on 170/5. Jones made 24, before being caught by Mohammed Azharuddin off Singh. “I don’t really remember (how I got him out). But I remember he was accepting my challenges. I was flighting the ball and he was hitting me around. But I had decided in my mind that this was how I was going to get him out,” Singh said.

Set a target of 348, India were all out of 347, thus making it only the second Test match in the history of cricket to be tied—the first one was in 1960. Singh was, incidentally, the last man out, adjudged LBW while current Team India coach Ravi Shastri was stranded at the non-striker’s end.

Singh and Jones were part of the Rest of the World XI squad against MCC. They used to hit the nets together and simulate match conditions. “Every time he would bat in the nets, he would ask me what’s my field. We would simulate match situations, like Tests, ODIs.”

Singh said that Jones is gone too soon. “My heart goes out to his family. He is gone at such a young age.”

Last week, on September 19, Jones had tweeted images from the Madras Test, saying it changed his life forever. It did, for fellow cricketers like Singh, and for millions of cricket lovers around the world.