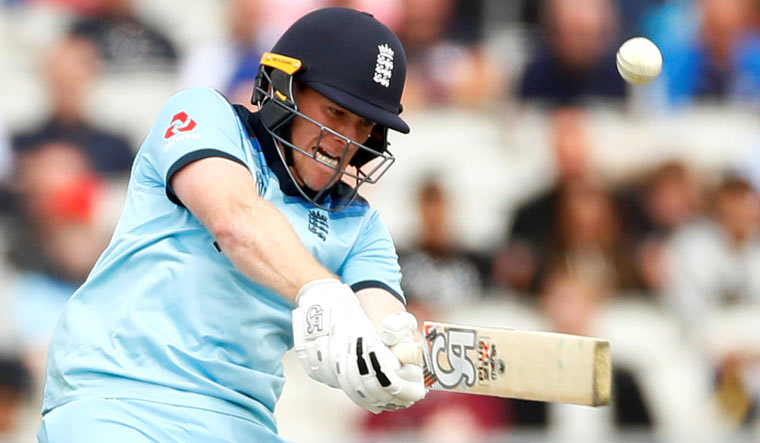 England skipper Eoin Morgan in action in a group match against Afghanistan at the ICC World Cup, at the Old Trafford | Reuters

Kolkata Knight Riders are a team brimming with talent and experience. In fact, it will be a problem of plenty for skipper Dinesh Karthik and new coach Brendon McCullum to pick their playing XI for their first match of the Indian Premier League 2020 against Mumbai Indians on Wednesday in Abu Dhabi.

This season will see some changes in the batting order, with the addition of England’s World Cup-winning captain Eoin Morgan, who will also be the KKR vice-captain. KKR are also bolstered by the availability of fit-again young Indian pacers like Kamlesh Nagarkoti and all-rounder Shivam Mavi, along with new recruit Ali Khan.

KKR go into their first match with a better idea of the conditions having seen how the wicket behaved at the Sheikh Zayed Stadium, plus the dew factor. The team will have a new opening pair in Sunil Narine and Shubman Gill and while Andre Russell has been the danger man in the middle-order for KKR, the addition of Eoin Morgan makes the batting order ultra-strong. All players arriving from England post the concluded ODI series against Australia, are available for selection for tomorrow's game.

Morgan is back at KKR after cameos at Kings XI Punjab and Sunrisers Hyderabad. His return to KKR was initiated by coach McCullum, a close friend and kindred spirit when it comes to aggressive and fearless approach to the game. Speaking about his friendship with the former Kiwi captain, Morgan said, "We are very good friends, and have known each other for some years now. The friendship started on tours and finding things you enjoy in common, and making memories together through enjoying those things. Horse racing is one of them, rugby as well. Both of us have enjoyed together with our families as well. We are good mates."

When asked whether he is ready to take on the role of the finisher in the side in place of the tried and tested Andre Russell, Morgan said, "I think, with this squad that we have, it gives us a lot of options in batting and bowling. Within the squad, we have number of cricketers with varied style of play that can fit specifically in the batting department. Guys have played significant roles. I know Andre Russell has played that role for a number of years now at Kolkata and done it exceptionally well. If I get a go at that, hopefully I will be able to aid that."

Monday night saw leg-spinner Yuzvendra Chahal delight everyone with his bowling, snapping up key wickets for Royal Challengers Bangalore in their match against Sunrisers Hyderabad. All eyes will be on Chahal's leg-spin mate Kuldeep Yadav, who will turn out for KKR. The Kanpur lad has had a tough last season. Coach McCullum expressed confidence in the young leg-spinner's ability to bounce back, saying, "In any cricketer's career, there will be periods of peak performance or times which are challenging. Kuldeep has been challenged a little bit. He has come back stronger, and is very determined. When given an opportunity, I am sure he will put up a very bold show."

KKR captain Dinesh Karthik described the team's new opening pairing unique. "I like it. Narine does not have a complicated batting style and Shubman is a gun—a quality player and there are lot of expectations from him around the world. I am sure he will exceed those expectations. They are a unique opening pair that we are proud of."

Meanwhile, Karthik also suggested allowing teams and players some leeway for exuberant celebrations (barred for now as per COVID-19 protocols) like those by RCB after the match against SRH. "Sometimes, it’s hard to hold emotions. Off the field, all are social distancing, but on ground, sometimes, you need to allow these emotions to come through. We are all in a bubble, and it should give us a little bit of leeway," he said.