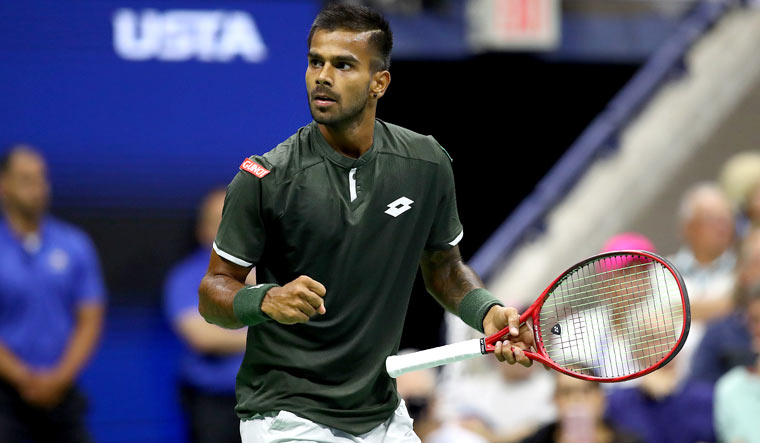 Sumit Nagal celebrates winning the first set against Roger Federer during their men's singles first round match on day one of the 2019 US Open, in New York | AFP

After four months of no tennis or travel for Sumit Nagal, he is back to doing what he loves the most. India's highest-ranked singles tennis player (world number 127) made his return to competitive tennis by winning the PSD Bank Nord Open title at the Nensel Tennis Academy in Pinneberg, near Hamburg, Germany. In fact, he has been based there throughout the four-month COVID-19 lockdown.

To add to his joy, Wimbledon announced a payout to all players despite cancellation. His earnings, during the last four months, had been practically nil because of the cancellation of events globally. "What they (All England Club) have come up with, is incredible. To be honest, nobody was expecting them to come up with any sort of payment to the players. Any help around this time is very useful as we are dependent on weekly basis. I spoke to some pros and they all understand and are very pleased," the 22-year-old said.

Financial constraints are a worry for players trying to get into top level of professional tennis circuit. The pandemic has also impacted the economy, and some of Nagal's sponsors, too, are, reportedly, facing a crunch presently.

Nagar, who hails from Jhajjar, Haryana, admitted it was a tough time. "It was definitely tough just not for me but for everyone. Days felt very long but I was okay with taking some time off early on as I needed it. But then, it went on and on. Nobody thought it would last this long—some countries are still under lockdown. But, in the end, nothing is bigger than being healthy. It was necessary we follow the right procedure."

In these hard times, the PSD Bank Nord Open win was a welcome one for Nagal. The tournament, organised by the German tennis federation, carried a prize money but no ATP points. But he is not complaining. "I won a small prize money tournament. It was fun. It was a small affair, with no more than 100 people wearing masks, watching you. It felt good. One could feel the adrenaline running in your body. You are back to playing matches. So, it felt pretty good."

Nagal had a good 2019 season, which saw him winning the Challenger de Buenos Aires and making the semifinals of five other Challenger events. He is staying put in Germany for now and will look to compete in whatever remains of the hard-court season.