Chhetri is enjoying his football and isn't going away anytime soon 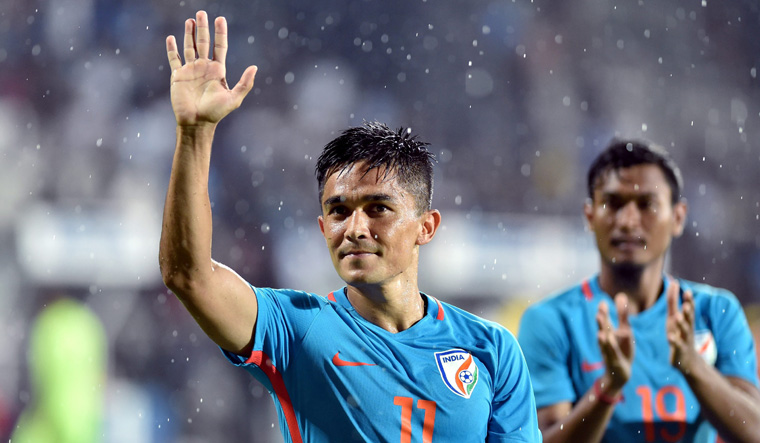 It has been a decade and a half since Sunil Chhetri made his international debut in Quetta against Pakistan in a friendly series in 2005. He had scored on his debut in the 1-1 drawn match.

Since then, the talismanic Indian football captain has played 115 matches and scored 72 goals. He is the second highest international scorer among active footballers, behind Portugal superstar Cristiano Ronaldo and above Argentine maestro Lionel Messi.

He completed 15 years of international career today, on June 12. Chhetri, 35, who holds the national record of most international matches and most number of goals, however, has made it clear that retirement plans are currently not on his mind. "I don't want to put numbers (on how long I will keep playing). But I am enjoying my football and I am not going away anytime soon," Chhetri said in a live chat on the Facebook page of Indian football team.

"I am fortunate to have played 15 years for my country. It is a dream, 3-4 years more probably and it will be (nearly) 20 years. Who would have thought to play 20 years and so I am living on my dream."

Despite the accolades, Chhetri is humble about his achievements and is quick to give credit where it is due. He is known to always support the youngsters in the team. A fitness freak, he constantly inspires his teammates to live a disciplined life on and off the field.

A couple of years ago, THE WEEK Senior Correspondent Sneha Bhura caught up with the legend. This article was originally published in THE MAN magazine.

Some say Chhetri is easily the best Indian football player in the last 15 years. With him around, the FIFA world ranking of India has consistently improved and is at an all-time best of 97.

Ensconced in a spacious and handsomely fitted penthouse-like hotel suite not far from the Delhi airport, Chhetri does not betray travel fatigue and is ready to field questions without any hurry. He looks sharp and straight, his face perpetually watchful. We are seated next to a light-filled kitchen-diner in the living room and the conversation inevitably veers to breakfast. Like a clean swerve, almost a quick manoeuvre with a ball, Chhetri tackles the niggling curiosity of his followers. “Oatmeal, eggs, fruit, nuts, coffee and coconut water; this is what I have been eating for breakfast the last 15 years,” says Chhetri. “So, when people ask me what is so different that I do, I say it is the normal everyday thing that is the most challenging. I think the most difficult part of a sportsperson’s career is that there are so many things that are so monotonous, but are important. You have to keep doing them every day,” he says. Chhetri is highly apologetic of cheat days, “taking it easy” or replacing oatmeal with wheat flakes or muesli.

Chhetri married his long-time Bengali girlfriend Sonam Bhattacharya last December and has deftly woven in his downtime with family after dinner, somewhere between 8pm and 10pm. This schedule is something he will unflinchingly follow for the next eight years at least, given his penchant for an unchanging time table. In Chhetri’s world, there are no excuses or half-hearted measures.

Secunderabad-born Chhetri—striker for the ISL team Bengaluru FC and captain of the Indian football team—didn’t have to look outside his own home for the football fever to kick in. He reveals that his parents were both avid footballers, with his mother having played in the Nepal women’s national team, while his engineer father represented the Indian Army. Football was a recurring theme at home even with patchy broadcast signals in the 1980s. He grew up adoring legends like I.M. Vijayan, Bhaichung Bhutia, Krishanu Dey in his early years, and later became a massive fan of Cristiano Ronaldo.

There are many significant firsts for Chhetri, but the most special was scoring his first India goal against Pakistan, in Quetta in June 2005, as part of the National Bank Football Cup, in the first ever Pakistan-India football series. “For the first time, I represented my country in a senior national team. Wearing your national team jersey for the first time ...that feeling is unparalleled. You always dream of playing for your country,” says Chhetri.

Early in his professional career, Chhetri generated a lot of interest in Europe and beyond when there were rumours that he would be signed on by a major league. He was the first Indian to be chosen in Major League Soccer with Kansas City Wizards in 2010 (but did not play any match there) and signed a two-year contract with the prestigious Sporting Clube de Portugal in 2012. A player of his calibre and ingenuity could have stuck around and stretched his luck further on transatlantic soil.

“I really wanted to stay there. I was enjoying it. But I was already 26 and wasn’t a regular. I was coming in as a change for matches. Sometimes, I regret (not staying on) and wish I had gone to Sporting Clube de Portugal when I was younger, at 19 or 20. I would have had more time. The training was amazing. I was playing with some top players. Eric Dier, who is now playing for Tottenham Hotspur, was my room partner then. But, not being in the first 11 was really messing with my head. That’s the only regret that I have,” admits Chhetri, insisting it had nothing to do with homesickness, the reason touted for many talented Indian football players withdrawing from overseas pitches.

“Dude, I adapt,” he asserts, and we believe him. Chhetri has played for 10 clubs from five states and three countries since 2002. Sample this: he has played for both Mohun Bagan and East Bengal in those heady days at the start of his career, but the sheer madness and football frenzy that existed in West Bengal are now strictly in the realm of fond memories. No sweet nostalgia for Chhetri whose abiding philosophy is to keep working hard and keep moving forward. “I miss it because football in Bengal is huge and I consider myself very fortunate to have played for both the clubs there. When I was there, I had (some) great time and support. But at Bengaluru FC, even here we are pampered.... The fans are amazing. I am really happy in Bengaluru.”

Fans who harbour hopes of Chhetri coming back to Bengal are in for disappointment. And no, Subrata Bhattacharya, the Mohun Bagan powerhouse and illustrious coach, has no designs to squirrel back son-in-law Chhetri to West Bengal. “My father-in-law (Subrata) and I talk a lot about football, about trends, about matches. I enjoy talking about football with him. But, never ever has he asked me to sign on for any club. Not him, not my wife, not anyone. My professional decisions are entirely mine. They never ask me to make a comeback. They are very happy I am at BFC,” says Chhetri.

By now, it is more than obvious that clarity of thought and a focused approach have helped a smallish Chhetri hoodwink some very formidable opponents on the field. Answering questions in the capacity of the captain of Indian football team, especially about the country’s chances of qualifying for the World Cup, he is unambiguous, and very realistic. “We have to ask how much time before we become better in Asia. We have to have targets that are nearer and more achievable. The top five Asian teams play the World Cup. Soon, with the rules changing, it might the first eight who will play the World Cup. So, for us to have any chance in the World Cup, we have to first be in the first 10, and try to remain there. Right now, going to the World Cup is too far-fetched a dream, because you might lose interest in between,” says Chhetri, as he points out that India is somewhere between 15 and 20. “All of us have to work very, very hard. All these Asian teams are working very hard,” he reminds us.

In this World Cup, he is rooting for Spain. Ask him if he would be there at the venue to cheer his favourite team and pat comes the response, “Nooo. Not Russia man.”

Chhetri is an ardent supporter of a single unified league. He is at pains to point out how this is the most reasonable roadmap for Indian football. “You take Spain, England, Germany, all the top teams and countries that are doing well are in the league system. Just follow it. To have one prime number one league, whether there are 20 teams, then the second tier, 20 teams, third tier 20 teams, relegation promotion, simple! And we can do it because we are a vast country. We can easily do it.”

He points out emphatically that currently India does not harness even 10 per cent of its sporting talent. His idealism, though, is infectious. “The day we are a proper sporting country, when most of our energy is devoted to identifying talent, bringing them into the system, and training them, we will be a different country. If a kid can only play and leave aside the dilemmas in his head, [imagine] what could we achieve as a nation,” says Chhetri, almost pleadingly.

At 33, Sunil Chhetri is in peak form and entertains no thoughts of what comes after retirement. Whether he will be part of football administration, seriously pursue post-match analysis or coach the next generation of footballers, all this perforce would come after active football. “Right now I am too busy enjoying the game and I just want to play for my country and my club,” says Chhetri, who knows he will have time to reflect on his staggering achievements when the hurly-burly’s done, when the battle is lost and won.

I.M. Bhutia; (after some prodding) Bhaichung Bhutia, only because I have played more games with him

Who is a better coach: Subrata Bhattacharya or your  father-in-law

You are going to kill me! Bangalore FC. (After much  prodding) I can’t do this...okay Mohun Bagan!

Giorgio Armani, the old one

Anything that goes in the net

Oh no! there are so many (hides his face) Okay, Bhaichung, because the chance to play with an idol was magical.