A Poet, A City & A Footballer: A peek into P.K. Banerjee's extravagant, colourful side

The Olympian footballer passed away on March 20 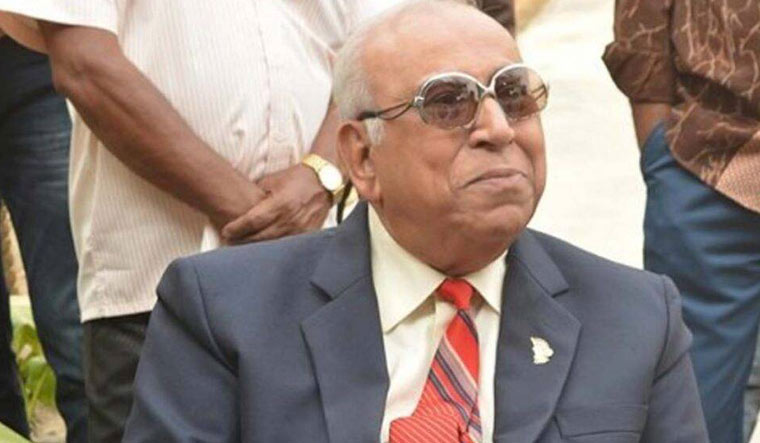 When the legendary Indian footballer P.K. Banerjee, who passed away on March 20 at 83 years, was just about three or four years old, in the small town of Maynaguri in north Bengal, he used to play ball with a baby elephant.

Banerjee would kick the ball and the calf would wrap his trunk around it before flinging it across. One day while playing, Banerjee took the ball and ran home, with the baby elephant following close behind. When Banerjee climbed the wooden stairs to his house, the baby elephant too tried doing the same. Three steps up and the wooden staircase started creaking. It inevitably crashed under the weight of the elephant. The mother of the elephant, Medini, could be heard screaming and roaring somewhere far away. Medini manged to break her chain and came running towards Banerjee's house. A disaster was waiting to unfold. Thankfully, Banerjee's father got wind of the incident and got mahouts and office helpers to extricate the injured baby elephant in time.

"I was also saved. Otherwise my football career too would have ended there," chuckles P.K. Banerjee in the 2015 documentary ‘A Poet, A City & A Footballer’, where the last 30 minutes (or the last chapter) is dedicated entirely to the Olympian footballer, one of the greatest India has ever seen.

But this documentary by four-time National Award-winning documentary filmmaker Joshy Joseph isn't exactly a hagiographical ode to a man associated with the golden era of Indian football in the 1960s-70s. Those biographical sketches and his litany of achievements as a player and coach are the stuff of sports historians and columnists. The documentary, in fact, wants to convey how difficult it was to make a film on a personality as larger than life as Banerjee - full of stories spooling out unhinged. It shows a Banerjee who is no longer actively involved in football and is passing his days with his coterie of friends and admirers, chatting, pontificating, reminiscing, and propelling others with his famous "vocal tonic". There is a terminally-ill filmmaker in the documentary trying to deal with the overtly elevated footballer.

The energy and exuberance of Banerjee, even in his 70s, becomes too overwhelming for the poet and filmmaker Goutam Sen tasked to make a film on the incessantly garrulous footballer. Sen is battling with cancer even as he tries to put together a film whose hero is way too excited and ungovernable. At one point, an irritated Sen asks a member of his film crew, "Why do you make him talk so much? Is it of any use?" The documentary deftly captures this overbearing, storyteller persona of the famous footballer and offers rare footage of a man who's hardly got any recorded material other than TV interviews.

As we learn to live in a lockdown, digging out this documentary available for free on YouTube, will be time well spent.

In fact, in 2013, Sen himself - after being diagnosed with fourth-stage lung cancer - had pitched for a documentary to Films Division on Banerjee, who had recently survived a stroke. But, in the middle of the shooting, Sen succumbed to his terminal illness and the film remained incomplete. Joshy Joseph, then deputy director general in-charge, Films Division (Kolkata), took it upon himself to show the process of how Goutam began shooting his last unfinished film and roped in Banerjee's footage at the very end. The meditative, more melancholy mood of the documentary, where Joseph shows Sen prepping up to meet his famous subject, is completely shattered by Banerjee's entry like a superhero or a Rajinikanth. "That sad build-up as a reflection of an impending death, Banerjee completely kills it with his energy in his typical vocal tonic," says Joshy, who met Banerjee five years ago in person.

Joshy recalls an anecdote which he doesn't include in the film. He remembers Banerjee telling him how he once signed an autograph for Satyajit Ray's son Sandip Ray. When Banerjee had first gone to meet filmmaker Satyajit Ray at his house with actor Soumitra Chatterjee, the footballer did not get as much attention from Ray as he thought he would for a person of his stature. But Satyajit's son was a big fan of the footballer and immediately asked for an autograph. "I took the longest time to sign and write that autograph just to show that I am no less important than him (Satyajit)," Joshy recalls Banerjee telling him this as an aside.

It is this extravagant, more colourful side of the legendary footballer that is revealed in ‘A Poet, A City & A Footballer’. When Sen dies, Banerjee seems sad and resigned at his untimely demise. "So many people wanted to make a film on me.... Ultimately, no one could," Banerjee rues.