Banerjee was probably one of the finest footballers India ever produced 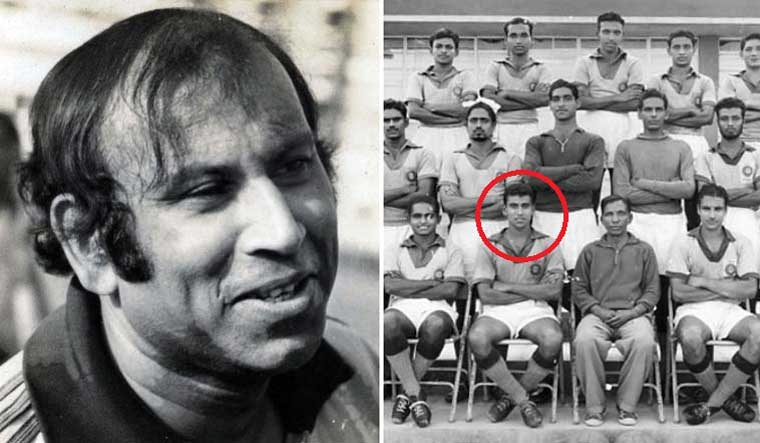 PK da. That's how Pradip Kumar Banerjee aka P.K. Banerjee was lovingly called by his legion of fans. For football-crazy Bengalis, the striker was one of their own—the ‘da’ stood for dada, meaning ‘big brother’ in Bengali.

He was probably one of the finest footballers India ever produced. Along with his exploits on the football field, what endeared him to the masses was his vast knowledge of history, politics and society. Also, he was admired for his fluency in English!

During his trips across the globe (he was sent to World Cups by the then Communist government in West Bengal), Banerjee met with legendary footballers like Eusebio, Michel Platini and John Cruyff. He used the opportunity to meet world-class coaches and learn from them in order to give the best training possible to Indian footballers. He coached the Indian football team for around two decades and remained connected as the team's adviser till the first decade of this millennium.

Banerjee, however, was largely known as a striker with powerful kicks, amazing dribbling skills and speed. Born in Jalpaiguri in north Bengal, Banerjee came to Kolkata (then Calcutta)—the Mecca of Asian football—in 1954. He was spotted by Syed Abdul Rahim, the legendary Indian football coach, who included him in the Indian team in 1955.

He came into the limelight shortly after his first appearance in 1955 as a right-winger in Dacca Quadrangular Tournament, at 19. In the same year, he joined the Eastern Railway after a short stint at the Aryan Football Club in Kolkata.

Banerjee was part of the Indian football team in the 1958 Tokyo Asian Games. But his moment of glory came in the 1962 Asian Games in Jakarta, where India rode on his remarkable performance to win its second gold medal in football—the first being at the 1951 Asian Games, where Sailen Manna, his another idol, proved to be the hero. Banerjee scored four goals in the Jakarta tournament, along with providing five assists.

Banerjee, Chuni Goswami and Tulsidas Balaram were known as the ‘terrific-trio’ of Indian football in the sixties, when even a World Cup appearance seemed possible. In the 1956 Melbourne Olympics, India reached the semifinal—the first Asian team to do so. Samar Banerjee was the captain then.

Though P.K. Banerjee did not score any goal at the Games, he played superbly throughout the tournament. He provided two crucial assists to Neville D’Souza in his hat-trick against Australia, which helped India reach the semifinal.

However, they lost to Yugoslavia in the semifinal and Bulgaria in the third-place match.

However, his career was affected by injuries post 1965, and it subsequently led to his retirement in 1967.

He was one of the first recipients of Arjuna Award, in 1961. He was also awarded the Padma Shri in 1990.

Banerjee’s exploits were acknowledged not only in India, but abroad, too. He was named Indian Footballer of the 20th century by FIFA, and was awarded the FIFA Order of Merit, the highest honour bestowed by the global footballing body, in 2004. He was awarded the Player of the Millennium in 2005 by FIFA. He also won the International Fair Play Award from the Olympic Committee—a feat that is yet to be repeated by any Indian footballer.

Interestingly, despite being a stalwart in Indian football, and especially from West Bengal, Banerjee did not play for either Mohun Bagan or East Bengal, or any of the popular clubs then. He started with Aryan FC, and spent almost his entire career at Eastern Railway FC. It was during his heydays—in 1958—that Eastern Railway FC won the Calcutta Football League for the first and last time.

Outside the football field, Banerjee mixed with several social and political organisations, but refused to be identified with any particular one.

He was married to professional swimmer and tennis player Arati who later became a strong supporter of women’s football in India. Arati died in 2003 due to liver cirrhosis.

The first child of his parents, Banerjee was like a guardian for the remaining six siblings. In fact, he was instrumental in bringing his brother Prasun to Kolkata football scene from Jalpaiguri. Prasun, who is also an Arjuna Awardee, captained the Indian football team and is currently a Lok Sabha MP representing Trinamool Congress.

“I cannot remember my father as he died when I was only three. Dada was my father. He was everything in my life,” Prasun Banerjee said.

Prasun broke down at the hospital in Kolkata where Banerjee was admitted because of pneumonia, Parkinson's disease and heart ailment.

“Country knows him as the greatest footballer. But no one knows how emotional he was. When he was coaching us, he was like the head of the family,” said former footballer Gautam Sarkar.

Those who know him say that Banerjee was talkative. When he started talking to someone—be it Platini or Nelson Mandela—it was difficult to stop him.