With love, from Kerala Blasters: Ogbeche, Schattorie and Jessel

As this ISL season comes to an end, three figures stand out for the Kerala Blasters 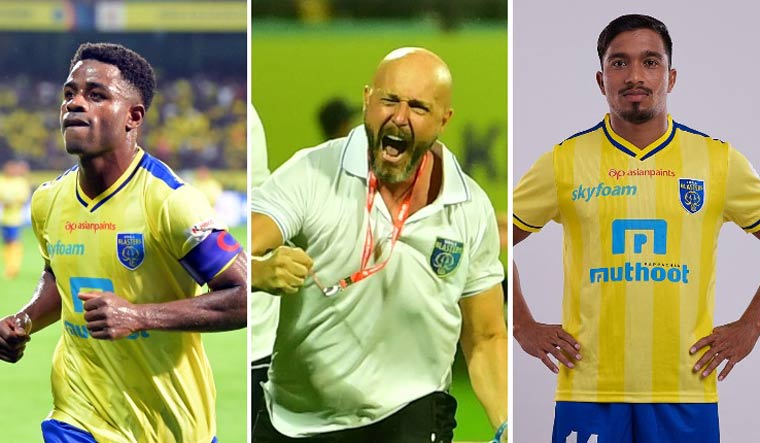 The sixth season of the Indian Super League is over. It was a season that carried the unfaltering hopes of Kerala Blasters fans; a season filled with electrifying performances and heartbreaking moments. As the season comes to an end, three figures stand out for the Blasters―coach Eelco Schattorie, captain Bartholomew Ogbeche and Jessel Carneiro. Let's get to know them through some hitherto unknown tales:

February 1. The first hat-trick of ISL season 6 was registered on this day, and it was Kerala Blasters star Bartholomew Ogbeche who scored it.

After the match, skipper Ogbeche was tasked with meeting reporters at the mixed zone. However, he didn't show up immediately. This was not surprising because that's how he is. The Nigerian footballer is a star on the field, but outside it, his body language would almost give one the feeling that Ogbeche is just lazy. In fact, after training sessions and matches, he is the last person to get on the team bus.

But, on February 1, the Kerala Blasters captain was late for a reason. Ogbeche had been crying. He seemed fine, but his tear-stained face gave it away. Kerala Blasters gave their everything during the match against Chennaiyin FC, but it wasn't enough. The Kochi-based team lost the match 3-6. Ogbeche would usually hang out with his teammates after a match, discussing and dissecting the game, going over the mistakes they had made and learning from it. There was none of that this time. The captain was just not up to it.

On new year's eve, the Blasters forward had visited an old-age home in Kochi along with his wife and two children. He had said that he felt at home, having spent time with the old women who lived there. Ogbeche had a special place in his heart for them and promised to return.

Ogbeche has also seen and felt the beauty of Kerala and its people up close―the backwaters, hills and rivers surely added to the mesmerising sights. And who can forget the captain getting together with a group of fishermen from Vypin in Kochi and cheering for the yellow brigade and Kerala Blasters?

At the Marriott Hotel in Edapally, a bald, bearded, bespectacled man wearing a Kerala Blasters t-shirt, walking in and out of the hotel has been a familiar sight for the last six months. He would sit near the glass doors near the garden during the early hours of the morning, and sometimes for hours after.

When asked about his favourite place in Kochi, Kerala Blasters coach Eelco Schattorie said that it was the sofa next to the glass doors at the hotel lobby. He explained why. The lobby had a lot of natural light; sunshine streams through the doors and windows; it's warm and cosy, and one can watch all the people coming in and out of the hotel.

Schattorie has not ventured out in Kochi much. Apart from training sessions and matches, he rarely steps out of the hotel. He says he is an introvert. But he doesn't stay cooped up in his hotel room; he'd rather hang around the lobby. The few times he had stepped out, he managed to catch a music performance at the Cochin University and watched ottan thullal, a traditional Kerala dance form. He is from a family of musicians (his father was a guitarist and others in his family are also into music). So, naturally, he loves music and is a proud drummer. In fact, during the fifth season of the ISL, when he had come to Kochi with the NorthEast United team, Schattorie had wowed players and other guests at the hotel with his skills on the drums!

This season, Goans gave two surprises to Kerala Blasters―one was defender Jessel Carneiro; the other the expansion of the yellow brigade to Curtorim, a small town in Goa. Carneiro didn't come from any major football league. The 28-year-old does not even have many credits to his name apart from leading the state team in the Santosh Trophy. And yet, coach Schattorie saw something in him―his commitment to the game was unwavering.

There is no doubt that Carneiro―the only player to have played in every match for the Kerala Blasters this season―was the team's best find this time. With each game, the young Goan managed to earn the trust of not only his teammates, but also the Manjappada. He captured the hearts of the yellow brigade with his performance. However, this trust didn't come easily, he says. Carneiro knew that he could take freekicks and corner kicks well, but his team didn't. He was initially not asked to take any freekicks or corner kicks, but a few weeks in, Carneiro walked up to Schattorie and said that he can do it. The coach was all for it. The young player had to wait a while before proving his worth, but it eventually happened. He knows that these opportunities didn't fall in his lap, he had to ask for it, earn it.

Goa's second surprise was revealed when the Blasters were in Madgaon for a match against Goa FC. The yellow brigade had set up camp in the east side of the gallery. But then, to the astonishment of many, there was another yellow brigade on the west side, and another not far from it. Everyone was wearing the same jersey―no. 14. They were all here for Jessel Carneiro; all of them from the town of Curtorim in Salcette, south Goa.

The streets of Curtorim were waiting with even more surprises the next day―Kerala Blasters banners were everywhere and the roads looked like they were painted yellow. Just like the villages in Malappuram district in Kerala that adorn the colours of the Brazilian team, Curtorim was transformed into a Kerala Blasters haven.

This article was originally published in Malayalam in Malayala Manorama.