The video of the goal, went viral after it was shared by I.M. Vijayan 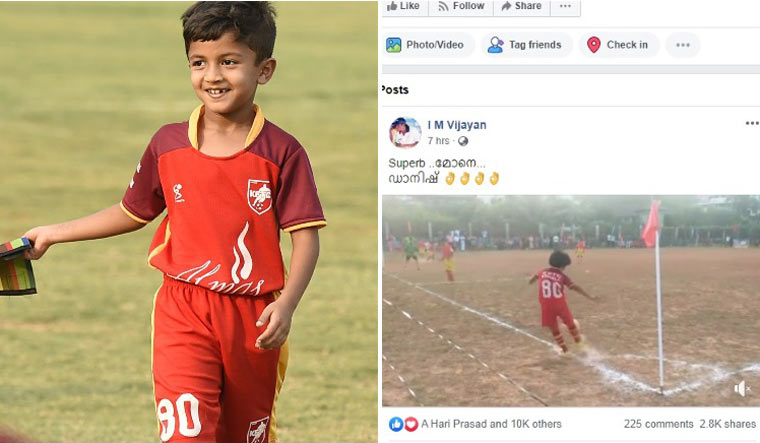 A sensational goal off a corner-kick has made a 10-year old boy from Kerala a social media sensation. Dani P.K., a class 5 student of Presentation School, Kozhikode, scored the goal for Kerala Football Training Centre (KFTC) club.

He scored the goal in the final of the All Kerala Kids Football tournament at Meenangadi in Wayanad district. Dani, who has earned the nickname 'Lionel' Dani for his exploits with the ball, also scored a hat-trick in the match. He was adjudged player of the tournament for his 13 goals overall.

The video of the goal, which was first shared by Dani's mother Novia Ashraf on Facebook on February 9, went viral after it was shared by former legendary striker I.M. Vijayan. It has garnered more than a lakh views and more than 2,000 shares. In the video, Dani is seen curving the ball right into the net over the goalkeeper's head from the corner.

The goal might remind football fans of a similar wonder goal (not off a corner, though) scored by Brazilian great Roberto Carlos for Real Madrid against Tenerife in 1997-98. He raced down the left-flank and, from the goal line, unleashed a left-footed strike from zero angle, that curved into the goal, leaving the goalkeeper stunned.

Dani's father Abu Hashim, who is a photographer with Malayala Manorama, said that his son has been playing football from an early age. "Football is his favourite sport. He loves it so much that no matter how many footballs we buy him, he always asks for another one," Hashim told THE WEEK. “Every morning, Novia and I have to help him with packing his school bag as per the timetable. But he needs no alarm clock, no help to wake up or pack his football kit when he has to go for training at 6am. Such is his love for the game,” he said.

Dani joined the KFTC club when he was in class 2 and has been playing with much older kids for the last three years.

“Dani swears by Barcelona,” said Hashim. So, no prizes for guessing who his footballing idol is. He wants to visit Spain during his school vacation next year. “That's the only country he wants to visit. And, of course, he wants to meet Messi.”

In fact, it was his passion for the game and his talent that landed him a role in a Malayalam film Aanaparambile World Cup, to be released in May, his father said. The story revolves around a football-crazy kid (Dani), and stars Antony 'Pepe' Varghese of Angamali Diaries and Jallikattu fame. The film also has Vijayan and another former India international Jo Paul Ancheri playing themselves.

“Dani was always around Vijayan during the shoot. He had a great time shooting with the two stalwarts of Indian football,” Hashim said.