B.J. Watling scored his seventh Test century as the match heads for a draw 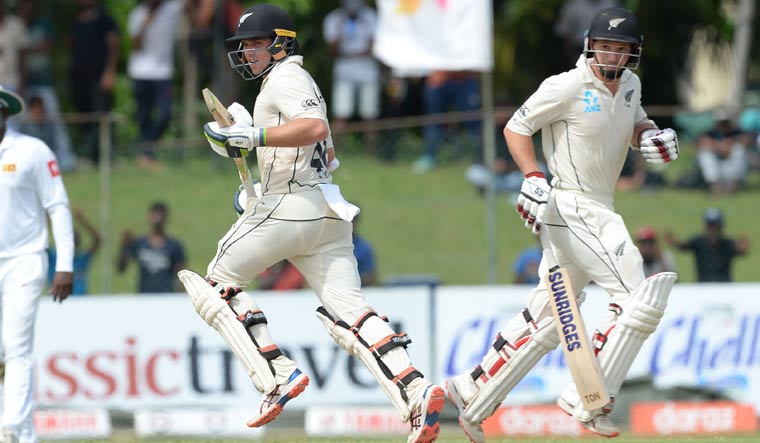 New Zealand's Tom Latham (left) and B.J. Watling run between the wickets during the fourth day of the second Test in Colombo | AFP

New Zealand declared their first innings on 431 for six against Sri Lanka on the final day of the second and final Test in Colombo with a lead of 187 runs.

B.J. Watling scored his seventh Test century as the Kiwis struggle for a series levelling win. However, the rain-hit second Test in Colombo is likely to head to a draw with Sri Lanka beginning their second innings with about 90 overs to play on the final day.

Rain allowed just 66 overs of play on the first two days of the match, while only 48 overs could be bowled on the fourth day due to wet weather.

Sri Lanka won the first Test in Galle after captain Dimuth Karunaratne and Lahiru Thirimanne guided the hosts to a six-wicket victory.

New Zealand captain Kane Williamson declared the innings calling his batsmen to give his bowlers a shot at victory in the final Test. Tom Latham top-scored for the Kiwis with a gallant 154. Colin de Grandhomme (83) and Watling (105 not out) helped the visitors to a respectable score.