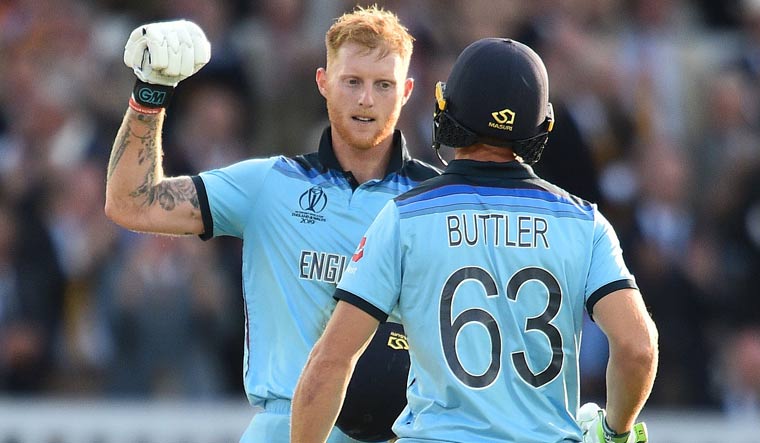 With his "hand on heart", England's World Cup hero Ben Stokes says he never asked the umpires to cancel the four runs off an overthrow during the epic final against New Zealand.

The statement by Stokes contradicts claims made by England fast bowler and Test teammate of Stokes James Anderson. Anderson had said earlier in the month Stokes had asked for the four overthrow runs to be cancelled.

One of the biggest turning points of the July 14 final was the overthrow on the fourth ball of the final over bowled by Trent Boult.

In a bid to complete his second run, a diving Stokes, his bat outstretched, accidentally deflected the ball coming from the deep midwicket region to the third man boundary.

"I saw all of that. I was thinking to myself, did I say that? But hand on heart, I did not go up to the umpires and say something like that to the umpires," Stokes said in the latest episode of BBC podcast Tuffers and Vaughan.

Stokes, who remained not out on 84 at the end of regulation play before swinging his bat again in the super over, said he apologised to New Zealand skipper Kane Williamson and wicket-keeper Tom Latham as the ball rolled past the boundary.

"I went straight to Tom Latham and said 'Mate, I am so sorry', looked over to Kane (Williamson) and said 'I'm sorry'," he said.

Stokes said he has seen the 50th over of the England innings multiple times since the July 14 evening at Lord's and said it was "nerve-wracking to watch" despite the fact that his team is already a World Cup winner.