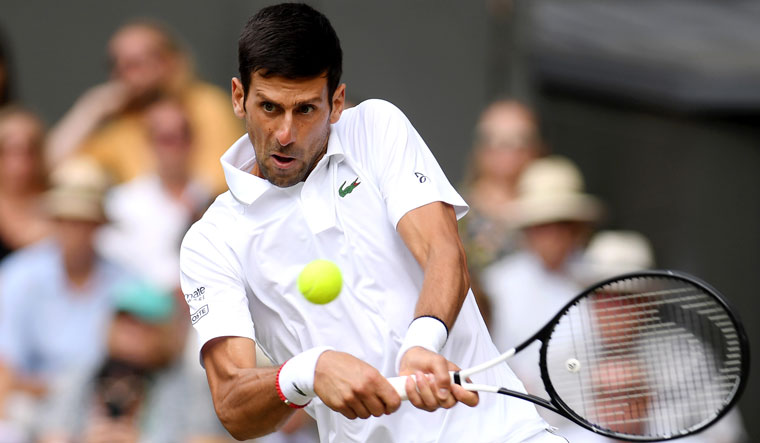 At 4 hours and 57 minutes, it was the longest Wimbledon final ever played and settled by a final set tie-break for the first time.

Djokovic is the first man in 71 years to win the title from match points down. He is now level with Bjorn Borg as a five-time Wimbledon winner.

"I think that if this is not the most exciting final, then definitely it's in the top two or three of my career against one of the greatest players of all time, Roger, who I respect," said Djokovic.

"Unfortunately, in this type of match, someone has to lose. It is quite unreal to be two match points down to come back and strange to play a tie-break at 12-12," Djokovic declared. Djokovic is just four Grand Slam titles shy of the all-time record held by Federer, who is more than five years older than him.

It was incredibly tough on Federer, chasing a ninth Wimbledon crown, who didn't face a break point until the eighth game of the fourth set.

He even had two match points in the 16th game of the deciding set, which lasted over two hours. "It was long and it had everything. I had answers, so did he and we played some great tennis," said Federer. "I hope I give some other people at 37 the feeling it is not over yet."

Djokovic's win meant that the 'Big Three' of men's tennis—himself, Federer and Rafael Nadal—have won the last 11 Grand Slams. He has now won nine of his last 11 clashes against Federer and three of their four Wimbledon meetings.

With William and Catherine, the Duke and Duchess of Cambridge, looking on from the Royal Box, Federer carved out the only break point of the opening set. But Djokovic saved it and with serve dominating, the set was decided by the tie-break.

The top seed was 3-1 up, then Federer inched to 5-3 before Djokovic swept the next four points.

At 58 minutes, it was two minutes longer than the women's final on Saturday. Djokovic, however, then went completely off the boil, losing his footing as he was broken in the first game of the second set.

Federer broke twice again and after just 25 more minutes, the final was all-square with Djokovic managing just two winners in the set.

Federer was comfortably on top in the third set, flashing winners from all parts of the court but was unable to convert a set point in the 10th game.

Djokovic made him pay. Despite not managing a single break point in the match, he pounced again in the tie-break to reclaim the lead.

Federer wasn't finished. Back came the veteran with a double break for 5-2. Djokovic then carved out his first break points of the match in the eighth game.

The first was saved after a breathtaking 35-shot rally before the Serb finally broke for the first time.

It was too little, too late, however, as Federer deservedly levelled the final. Into a tense finale, Federer saved three break points in the fourth game but a drilled, backhand passing shot gave Djokovic the break in the sixth game for a 4-2 lead.

The world number one couldn't back it up and Federer had Centre Court on their feet when he restored parity in the next game.

Despite twice being just two points from defeat, Federer broke for 8-7 but was unable to serve out for the match.

As the clock ticked past the previous longest final of 4 hours and 48 minutes it took Nadal to beat Federer in the 2008 final, the match was decided by the first 12-12 tie-break in a singles match at the tournament.

Federer finished with 25 aces and 94 winners to Djokovic's 10 aces and 54 winners.