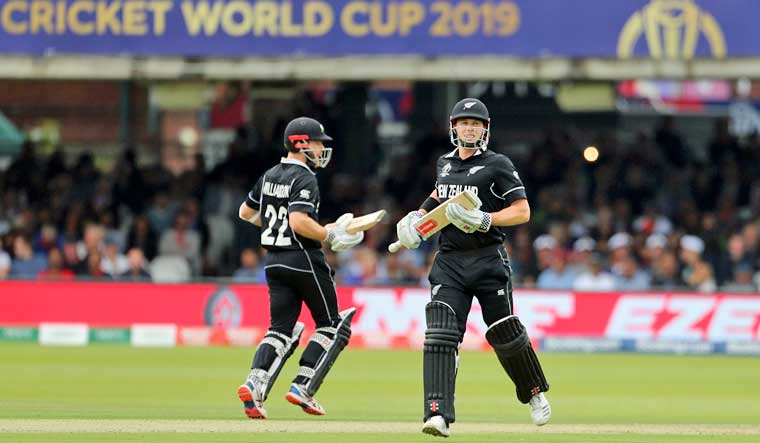 New Zealand once again put up a modest batting performance under overcast conditions to post 241 for eight against a quality England pace attack that kept on asking probing questions in the World Cup final on Sunday.

While Woakes had the best figures statistically, it was the tall Liam Plunkett (3/42 in 10 overs), who used the cross-seam variations effectively to stop the Black Caps on their tracks.

They would now be hoping that their pace bowlers use the conditions as well as the England bowlers did in the first half.

Only Tom Latham (47 off 56 balls) contributed in the middle overs in another mediocre effort from the New Zealanders on another big day.

Martin Guptill (19 off 18 balls) had started on a positive note but after surviving a caught behind appeal off Archer, he wasn't lucky the second time when Woakes got one to slightly shape in and he was caught plumb in-front.

Williamson and Nicholls, just like the India game, were trying to preserve their wicket with occasional boundaries. They were steady during their 16.2 over stand without being spectacular.

It was Plunkett, who got the all important wicket of Williamson when the New Zealand skipper tried to play away from his body and the nick was snapped by Buttler.

Plunkett then removed another set batsman Nicholls with a cross seam delivery that had the left-hander playing on while shaping up for a big shot.

After it became 118 for three from a comfortable 103 for one, New Zealand could never effectively force the pace.

The England bowling had variations of every type Archer hurled it full and fast on the blockhole, Plunkett bowled back of the length and Woakes, who used his slower variations in the final overs, made life difficult for the New Zealand batsmen.